Hello, again. It's been a week.

Ben's cable-knit scarf has reached a meter, 103cm to be exact. Best evenings I managed 7cm-ish, so I'll be happy if I'm done this week because I have three/four smaller knitting projects in mind already. 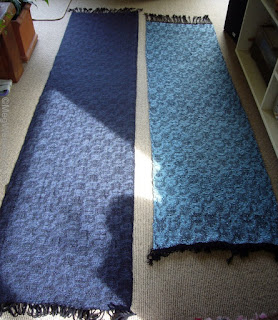 Here are the two from black merino/mohair warp in the same hellebore draft. The piece on the left has scalloped selvedge on both sides in places, but not enough to "disqualify", and has a super duper pleasing hand. The silk piece on the right has uneven beating and in this draft, it's like very obvious. But the big-dog-leaning silk weight is luxurious. Not sure how to deal with this. 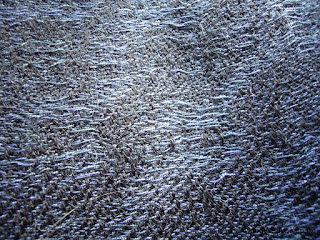 The sent-to-me-by-mistake weft is a warp yarn, probably merino. I didn't believe my eyes nor all the reading because even back then it was impossible to source them that I knew of. (Which is probably why this was not on their website; I'm thinking a secret/special order?) It doesn't full, but sits/floats on top of the cloth. In this context, with the piece looking like a whole bunch of similar faces, I like the uncommitted/uncertain appearance.

This weft is skinny and compared to what I normally use, wiry, almost like  thicker mercerized cotton. Yet with the merino/mohair warp, fulled, the resultant cloth doesn't feel like a mixture of two distinct materials, not like wire and fluff I've also woven in the past. The piece has a hard-to-describe texture; it's super drapey, not cushy/clingy; has a sophisticated grown-up feel, definitely a special outing piece and not for "sick day in bed" comfort, (I tell this to all my cashmere customers, and some wear them as prescribed!) and it has been a most surprising outcome. 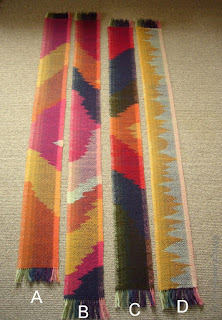 Now for the fun part; the first clasped weft warp, almost a year in the making. The picture shows what I was seeing as I wove, i.e. starting from the near side finishing at the far side.

A was the fist and the only piece from the first threading, after simplifying the treadling. I had no other plan than to not change the colors too often and not to use three at once, so each color section is long. The sizes of the sections and color combination is most pleasing to me. Even that the palest lime patch is not exactly in the middle lengthwise is a nice touch.

You can see I started B out more ambitious. but got a little tired and the sections grew longer. As I wove I wasn't sure about the twill design; I thought a regular pattern/draft showed the irregular color changes better. And the lime green looks out of place.

C and D, I chose the weft colors first; in fact, while weaving B, I thought the saturated crayon colors very attractive and wound and lined up the bobbins for C, but as a whole piece, I'm not sure. I know it'd look good on black/charcoal/navy. I also started to think changing the direction of the twill so often wasn't making the piece necessarily more interesting. I tried to recreate the balance I liked in A.

Then came D. I'm sure I've seen a few like this in the past, though possibly done by dyeing. I chose the dark yellow first, and wanted another color that didn't compete and chose the lime, though now I'm not sure about the selection. I prefer the loud, impactful combination like A, at least similar intensity in the two colors. I also simplified the treadling a whole lot more.

The blue/purple part of the warp has three colors, which came through beautifully while weaving, especially with the lime weft part, but after fulling, that's looking ho hum; it looks much better with the navy weft in B and C.

Next warp is Esther's in black/white gradation. After I weave hers, I'm thinking of weaving another in the style of D with black and white wefts, a night time city skyline.

At the moment I'm more interested in the color interactions in the clasped weft pieces than the shapes.

I've been looking at the brown piece, and I like the draft better ever day. I am contemplating using the gray warp to weave better-planned pieces, (i.e. threaded symmetrically,) but I'm not sure. The original squares idea is just as appealing.

I've had the biggest carbohydrate blowout in the last year and a half, a week of munching on crackers, chocolate, ice cream and frozen berries; I even ate a bowl of cereal! Though we've never been completely off carbohydrate, I've never blown so completely and consciously so far. I've been despondent and disgruntled by our meals for a while, (so boring!!) without trying; if you do carbo-free seriously, meals aren't as boring as you'd expect, and the body becomes so sensitive to all kinds of flavors and smells, every meal is sensational. That hadn't be the case for a while chez B&M; I still make sauerkrauts and other bottled stuff; we still have protein sitting on top of a big salad, but when Ben's not home, I'll even fetch a step ladder to dig into our "special/sometime" treats.