Liz Kendrick sings with my mate Kath Bee in their adult-contemporary duo Zilk, and in their fabulous foursome, The Nancies. (She's the tall one, in the black skirt.) But she's also a funky jewelry maker.

When she rang last year to order a shawl for a friend and asked if we could do a swap, I was worried (because I don't wear jewelry) and excited (because Liz is so lovely and funky), but I went ahead anyway, because I'd decided I never want to miss a chance of interacting with other artists.

With the shawl, I had a couple of new experiences. The first happened while listening to Liz tell me about the giftee Warren. During a face-to-face conversation, I usually pick up clues from facial expressions and body language, but on the phone, especially with someone I don't now well, I concentrate on the words and the facts. However, even though I didn't know Liz too well, I was so used to listening to her and picking up her voice during performances that I was hearing nuances and I became aware of feeling surrounded by Liz's voice. (And, oh, what a lovely voice it is!)

I took a lot of notes that evening, and doodled a little, but felt overwhelmed by the amount of information; I didn't collect any more facts than I normally do, but the depths of friendship don't come through on normal phone conversations or emails usually. That was Friday night. On Sunday morning, I woke up with the exact picture of the piece, and the rest was almost mechanical. Well, besides the unplanned tension problem. Anyhow, enough about me.

In January, Liz was part of an exhibition called Klustre at the Refinery so I went and had a look at her work. They were funky, styles I would usually not consider, but I was excited about having something made for me that I might never have chosen myself.

I've been interested in brooches these last few years, because they seem most complementary to textiles. We discussed a design for a brooch that won't catch easily, kept the contemporary feel of her pieces in Klustre, and smaller than her normal pieces because I'm short. Other than that, I picked every option that felt counterintuitive.

This week Liz popped into Sue's Gallery with the piece photographed above. The silver is shiny and smooth (the colors seen in the photo is a reflection of the woodwork,) whilst the copper part is dull and spiky (though filed down more than it appears). I adore the amoeba-like center (I've always been fascinated by single-celled creatures as well as deep-water creatures), and the silver bits look like wings. I haven't named it yet, he has a feel of a primordial (and mischievous) guardian angel who is going to lead me into all kinds of artistic (or aesthetic, if you prefer) sideways and alleyways. Guardian devil? Delicious!

And I thought you might appreciate how beautifully the reverse side is crafted. 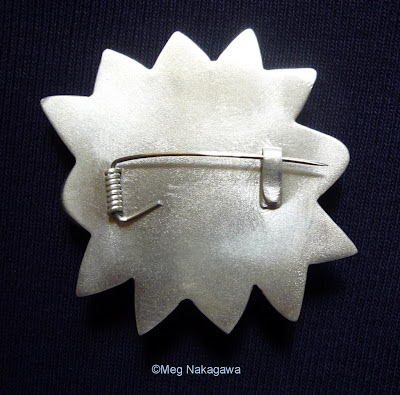 Liz Kendrick's work can be found at Lustre, on Collingwood Street, which is right next door to Sue Bateup's Weavers Gallery on Ajax, along the Maitai River from the Information Centre, or The Suter gallery shop. If you'd like to contact Liz directly, drop me a line.
Posted by Meg at 2/28/2008 12:25:00 PM