I had a bit of a rough week where a combination of events, thoughts and big flops on the loom brought on not panic with which I'm familiar, but a quieter crisis in confidence. Martin's advice, momentary rush of income, and making an appearance at the museum all amount to nothing if my weaving isn't any good, and suffice it to say, it hasn't been good. So I needed a breather.

Yesterday I spent the day in town.

I dropped off a shawl in a jewelery store. I met young Rebekah two years ago at the gym, and soon after I found out she has multiple sclerosis. I didn't see her much last year, and I read in the paper last week that she spent six months in the hospital. In that time she did some research and would like to go to Mexico for treatment, and her friends are holding an auction/dinner party to raise funds. Nice to be able to contribute in a small way.

Then I met up with Liz at the Turkish restaurant and gave her the shawl she ordered; she was off to Auckland and I had brunch. 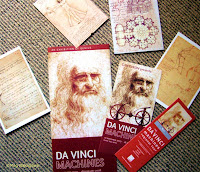 At the spur of the moment, I decided to go to the da Vinci Machine exhibit down the street. This has been going on all summer, but Ben and I promised to go once the school started so we can enjoy it in peace and quiet. I needed a strong dose of inspiration, so I went alone, and had a wonderful time imagining not so much da Vinci concocting ideas, but more the Niccolai men/Teknoart trying to recreate/craft the old-fashioned machines. With the use of electronics, new materials and different energy sources, many of the civil and military technology Leonardo invented or improved seem old. But I appreciate the simplicity of the mechanism, (talk about WYSIWYG) and I felt a smug satisfaction knowing looms and spinning wheels probably changed little since his days, (except for computer-related areas, and we weavers are pretty happy about that. The exhibit has been to Palmerston North, but it tours two other cities after Nelson, and from memory, Dunedin might have been one of them. Da Vinci's biography is something I've been wanting to read for a few years, so I hope I get on to it this year.

Then I went to the gym in the afternoon heat, after spending nearly three hours in the air-conditioned museum; it was hidious, but my head was in a good place, so it didn't bother me much.

All hot and sweaty, I went to buy tickets to two upcoming events; one is Opera in the Park, about which I had to give it real thought. It's not often we have a chance to listen to Kiri Te Kanawa live, but Ben is so not a classical music fan, and the tickets were out of our comfort zone. I read the blurb more carefully, and then broke the news to Ben I wanted to go. He knows I've been particularly enamored by the voice of Jonathan Lemalu, and he's not often in New Zealand these days. So we got picnic seats; we bring our own chairs or blanket, a picnic basket, and our binoculars; we get to take part in a big event without breaking the bank, and the casual dress code is definitely more our style.

The other is As You Like It. Grea Burton is one of two guys who have been working tirelessly to bring theater back to Nelson. (The other is Kim Merry.) In the past, he's put on plays in parks and at the top of Trafalgar Street where we have Twilight Market. He secured an old building last September and now has the consent to turn it into a theater. Meanwhile, this year's production will be held in the garage of the building!!! I got to talking with the woman who was selling the tickets, and I put my name down as a prospective "member" to help them with ushering and such. 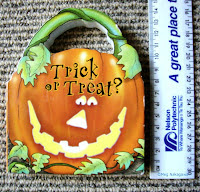 I then went back and forth between three bookstores for three hours, and found two books I really wanted but resisted, one I think I should read but don't want to now, and two biographies I intend to read later this year, and then one I didn't particularly want but had to have. This last one is pictured above; it is a tiny, cardboard book for kids, and the story and the colors are, shall I say, unattractive, but I've been hitting my head against a brick wall about the Altered Book/Guild challenge, and thought this book might work. The challenge, according to our newsletter, is this: "Take a child’s book, the thick page variety, with only a few pages in it. With sandpaper, sand the pages to remove the shine, and bright colours.

"Then …in whatever way you want ALTER THE BOOK. Rummage in your cupboards, under the bed, in cardboard boxes around the house, for fibre treasures, with a past and story. Arrange these together, stitch glue etc, and decorate the pages.

"The book must have a name, so that you tell it’s story."

I'm not as original or imaginative as my fellow guild members, so I don't think my plan will meet all these criteria, but I couldn't cope with the freedom of last year's challenge and abandoned it entirely. This year, I decided participating, in whatever capacity, is important, so I bought this ugly book. All I can say now is, doesn't the shape look like a handbag?

Then in the evening, Ben and I went to the Twilight Market as sightseers. And I learned these things from a sightseer's point of view: I like to browse, not necessarily looking for something to buy, but to look for artists about whom I would like to know more or even visit later. If I were to buy something, with my small budget, about $35 was the amount I was willing to part with if I found something especially appealing. But since I didn't know who was coming back next week, if I hesitated and decided to come back to have another look, I might have missed the chance.

Food for thought if I decide to do this again next year, or at another time. It was wonderful to know many of the artists participating and the organizers; I was among friends.

Nine more days before I submit "around six pieces" to the first exhibition this year. And my mind is still a wonderful, peaceful blank.
Posted by Meg at 2/02/2008 09:54:00 AM