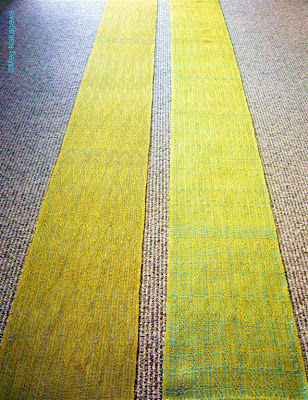 Weaving the cotton scarves was, as Kiwis say, a hard slog. With the first scarf I had so much problems with tension, I should have stopped and restarted, but like a machine I kept on weaving. (And I now have a not-so-short scarf-length of cotton cloth, which I'm going to cut up and frame, and from which I will make postcards and little purses.)

The right is the second scarf, which was the easiest to weave; the weft is what I think is a Delft blue, but in the daylight, it looks almost light-blue-brown in combination with the yellow. The draft is a straight twill in network treadling, tweaked to keep the maximum float at around 9.

The left was the last; the weft is in a bright teal, and looking at the warp and the weft separately, I wondered what kind of a deranged mind would use these two in combination, but together, they take away each other's brashness, and take on a copper-like appearance. I was tired and couldn't remember if I had enough warp, so I had to unwind to make sure; I wouldn't have had enough to pull to the front to tie the next one on. This is a plait tie-up treadled in network, again tweaked in the lift plan to keep the float under 11.

The colors are truer towards the bottom of the less-than-exhilarating photo.

This was a labor of love. I loved the way the cloth looked. This is exactly the kind of cloth I had in mind when I "pushed" that stick shuttle for the first time on my rigid heddle in August 1995. I would love to weave a wider cloth of this style and have someone make me a vest or use it in parts of a jacket some day. So in that respect, it was a joy.

But I was unwell, and had little previous experience with cotton, and it was a struggle to push on. And I wasn't sure about the viability of these scarves as a product; they look either traditional, ("waistcoats!" my art historian friend Rosie said,) or South/Central Asian, and I would be competing with the lovely but inexpensive textiles from that area in that case. And the material is cotton, so I won't be able to command as high prices as merino or cashmere. So even if I weave these for the gallery, they will remain a true labor of love.

Not that the others aren't, but you get my meaning.

While weaving the teal piece, I started making a mental list of how many things can go wrong in weaving. I'll post them separately; it was "you gotta laugh, or else you'll cry" kind of a day.

I was exhausted after this, and after finishing the teal piece, I decided not to tie on the second yellow warp, not that there was much left to tie on. In fact, on impulse, I did the sensible thing (I know this sounds strange) and started to partially dismantle the loom and oiled it and washed the heddles.

I bought this loom in July 2002 and it was only the second time I oiled the entire loom, though I had been doing so in dribs and drabs. I thought I better show my appreciation for the hard work it has done for me, especially in the last couple of years.