Mama Came with the Job 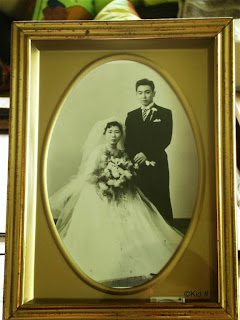 It must have been 1954 or 55. Dad had graduated with a BA in Chemistry, worked as the resident chemist in a rubber factory, got tuberculosis and dropped out of life for a couple of years, and was trying to restart his life. He got a call from his old professor, and went to a job interview at a new university in Yokohama. The interview went well, and he got the job on the proviso that he'd go straight back to grad school and get his PhD. Then the big boss asked if Dad is "taken", to which Dad said, "No". The boss said he's got a spare daughter and would he be interested in meeting her? Apparently he was smittened by her instantly and that's how my parents got married. Seriously. Mama had a veto right, mind you, so it was an arranged meeting, as of is the case in Japan, not exactly an arranged marriage.

Well, he got his Ph. D. in the standard five years. Dad also promised Mama if she married him, he'll quit smoking, but that didn't happen for a long, long time. At times he'd quit for three, five, or one time nine years, and then take it up again.

In Japan, before you meet a prospective spouse by arrangement, you exchange personal CV/resumes and photographs and on his CV, Dad lied about his height by about 5cm/2 inches, and Mama didn't figure this out until 20+ years later, though she suspected something. Yip, you write your height and sometimes even weight and schools your parents and male siblings attended, and where your dad and male siblings and male in-laws work, and all that kind of crazy stuff.

After Grandpa retired, Dad decided to move on to different university as well. We half-joked if Mama had to be "returned", and if so, to Grandpa or to the university.

Last Boxing Day was my parents' 53rd Anniversary. Their 50th was overshadowed by Dad having been diagnosed with colon cancer in late November, and the prospect of an operation "sometime after January 15" hanging before them. So each year after that has been a bonus. Though theirs is not so much romantic as pragmatic and reliable (as are many marriages of that generation in that culture), it's still going, and good on them!

I tell this story all the time, but for the first time this year I wondered what would Dad had done if he didn't like Mama: would he have married her anyway, or just taken the job and risk bad employee/employer relationship, or foregone both? Too funny to think about it.
Posted by Meg at 1/01/2009 06:03:00 PM