Yesterday I spent half the time feeling like I was run over by a freight train, the long American variety, and the other half energized and ready to work on a few projects. Interpersonal difficulties are not new to me, and this won't be the last; I find it very difficult to let things go and move on. I replay the scenario over and over and over in my head, look at the scenario my point of view and everybody else's, and even say under my breath things I would have wanted to say.

I realized, while talking to Pat on Tuesday, that I grew up in places where being easy-going and thick-skinned were separated by a very thin, icy line. Fussing over people and paying attention to details were virtues, especially for women and the young, and I was most definitely trained to anticipate everybody's needs and act on them before a request is voiced. There were parts of my office work life that benefited from fine-tuning this anticipation/guesswork, but I didn't think I did this in my personal life because I'm too lazy. There is another part of me that makes no assumption especially pertaining to work, which took some years of training myself, because I want to leave space for people's opinions/advices in case there are good ones.

Monday's meeting took me back to my childhood, where often I apologized to my parents and teachers because I was told I'd been bad, without, sometimes, knowing what I had done. On the other hand, I'd been feeling really "normal" for the last three months, and I don't want to slip back, so I've decided to don the thick skin, if it is that in this case, and opt to move on. Even I'm tired of thinking about Monday. 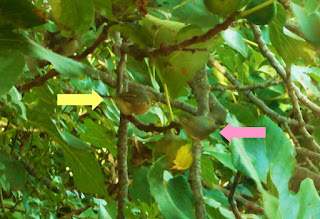 This morning I spent about 90 minutes watching one wax eye try to eat an unripe fig. This fig tree is right in front of our office window. This wax eye (yellow arrow) appeared slightly smaller than the others, and had terrible coordination; it kept slipping off the edge of the fruit and sliding off the leaf below, and the branch above the fruit was a tad too far for comfort.

When other wax eyes came near the chosen fig, this little one would stare them down, sometimes puffing his whole body, sometimes spreading his wing, to chase them away. It was comical because all other wax eyes were better coordinated and didn't have problems staying around the fruit, but the little one must have sent really bad vibes because they would eventually stop eating and look up and on at least half a dozen occasions, I witnessed a silent, motionless staring contests that lasted up to a couple of minutes, and invariably, they all flew away.

And of course I saw myself in the little, mean one; the least experienced and newest comer to textile having lots of opinions and huffing and puffing to try to protect its turf.  Funny, isn't it? The little wax eye, though, didn't even challenge the common sparrows; it just sat at on the same brunch, probably mumbling mean thought and wishing the big guys away. Even later, the sparrows lot out to the blackbirds.

What I didn't understand was the attraction of this particular fruit; there are tons more larger or riper ones on the tree; in fact, this was probably one of the smallest!

Don't worry about my head; yesterday I did some more sampling on the bright warp and finally decided what the second piece on that warp is going to be, and started work a little more concretely on two ideas for the exhibition. 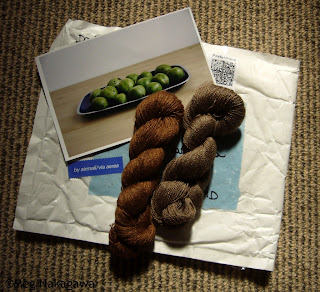 Thank you so much, Doni; I didn't realize an Italian meter is so much longer than a New Zealand meter. The Merino/cashmere/silk is so soft and lovely I definitely want to use the "leftover" in something for myself.
Posted by Meg at 3/15/2012 06:00:00 PM