What, The Penultimate Weaving Day??

I wove for about an hour, after modifying every lift plan in the first and second combination every so slightly.  In some instances it worked, and made the appearance of the block slightly different though you can't tell here because they are not seen along the original lift plans; in some instances, they look like Big Mistakes. But I'm going ahead; I don't pray a lot, but when I do, I get distracted and loose my train of thoughts, and I often wonder how many favors/forgivenesses one can ask in the duration of one prayer, and how long I can keep his attention to myself before handing him over to the next prayer. And by him, I mean, THAT Him, because I did go to a Catholic Convent School for 10 years. 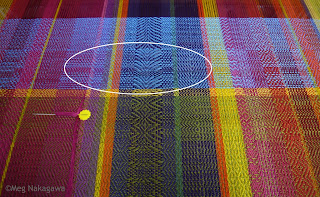 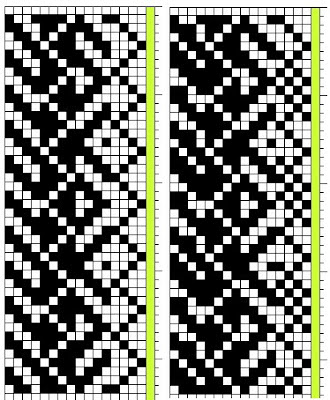 For example, the draft that looks Very Bad above was altered like this.

Lately, though, I thank the universe, sometimes out loud, instead of praying.

I had planned to weave for just one more day and I've woven 125.5 cm so far, but because I probably don't need to do anything more to the fringes, I could weave Friday afternoon, I suppose. I'd like to get back to it this afternoon/evening, but not sure if I can because we're having supper at a pub with friends we get to see only once or twice a year and then tale a stroll along the isles of the supermarket.
Posted by Meg at 3/07/2012 03:46:00 PM