Well, it's off the loom, and currently resting under the couch. 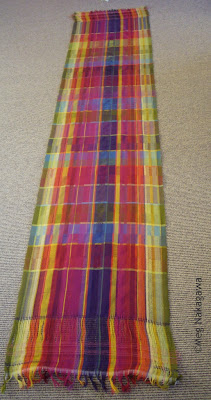 Because selecting the weft colors was such a big part while I wove, I was surprised to see such bold vertical stripes when I put it on the floor. 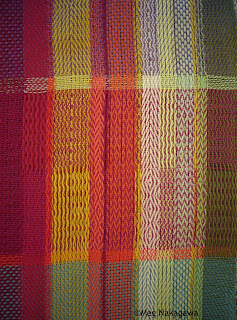 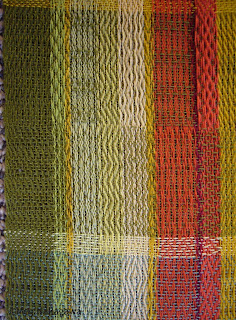 There are a lot of bits I like, sometimes the pattern, sometimes the color combination. There are a few weaving mistakes, which I decided to leave in this piece, partly to admonish my being so terribly nervous/intimidated by the faceless Guild selectors and their "technical criteria", but more my subsequent inability to enjoy anything to do with the Guild organization. 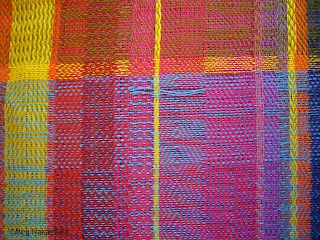 I do one have specific problem. One of the drafts I modified after the halfway point either had big float problems, or perhaps the tension was loose in some areas of the cloth that the shuttle went under the warps, and I have big floats across the width in two rows, separated by one OK row. If only one row was problematic, I would have simply pulled it out, but with two rows, I would need to do some mending.

I'm relieved I'm finished. But as usual, I'm wearing that same old stony expression and feel exasperated. I can't wait to move on to the next piece. Or at least to wash and press this and see how it'll turn out.
Posted by Meg at 3/08/2012 08:33:00 PM