Goodness, it feels like a long time, but it really hasn't been.

It's Sunday night here, and I am trying to remember what I did these last few days.  (Wait until you get to be my age, and you might be doing this also!) 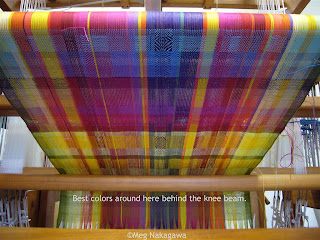 I had pins and needles in my left elbow from Wednesday night to yesterday so I haven't woven, but this is the sampling I did on Wednesday. When I was finishing the National Exhibition piece, I made up my mind the last piece from this warp was going to have one weft, a rather unattractive yellowy olivy green which when used in this warp looks splendidly shiny, nuanced and dignified. For the draft, I was going to one relatively simple draft of about 60 picks long, and modify it just a little and weave, and modify just a little more and weave, so if you looked at the piece from one end, your eyes might slowly travel, noticing the tiny differences, and end up at the other end.

I decided against it for this warp, because I couldn't predict the floats. I was lucky, the Nat Exb piece ended up having only four ends that had really bad floats. I didn't think it was a good move to weave, check both sides, fix floats, etc. So what I did was to make one simple draft 60 picks long, and again advanced it four shafts at a time, and then changed face, and I sampled the eight versions; five of these looked good, so I'm using these.

Then I thought I might as well use a few wefts, and sampled the lovely pale greens and yellows and was ready to go. Then, I had another idea, didn't I? As a merchandise, I thought purples, pinks, reds and perhaps the stronger greens/teals/gold would work better. I don't even know if this is going to be a merchandise; I had thought of gifting it to a mate whose house was badly flooded and whose mother was mugged! If I'm going to give it to him, which would he prefer?

For now, I'm going with the "jewel" colors, against gut feeling. Selling my soul? I don't know, but I still have to pay for Brisbane, too.

Friday after drawing, I didn't come home right away. If I had, I would have wanted to weave, and my elbow was telling me it was a bad idea. So I saw "We Need to Talk about Kevin" (SO  not my kind of a film, though I usually like Tilda Swinton), and "The Iron Lady", (love Meryl Streep, but the film was... OK.) After we came home, we watched "Anonymous" and finally, a film I liked. I think it was in my university days I read something about Sir Francis Bacon possibly having written Shakespeare's plays, but not Edward, Earl of Oxford. (Did you know he went to Cambridge, by the way?) It was a pretty film, and I was impressed how dignified Rhys Ifans looked. (He was the naked roommate in "Notting Hill".)

Saturday morning I read some more about "Anonymous"; this is a movie, based on collection of facts but heavily edited/polished/moved around. But fun and pretty. I just didn't know there was a whole industry around discrediting the Bard.

I also came across one Dr Brene Brown's TED clips about vulnerability and shame, and bought the audio version of her first book. From what she's saying in the TED clips, I think my problems have a lot to do with what she's studying, and while I don't have a problem discussing shame like she says we do, I don't understand the distinctions among concepts like guilt, shame, humiliation, so it'll be good to listen to her book. Several times. I also thought perhaps I use my blog as a self-defense mechanism, as in attacking before getting attached, but that's for later.

Saturday afternoon we drove around Nelson region looking for and speaking with suppliers of cheese-making material and equipment, came home a bit tired, but spent the evening making Halloumi and Whey Ricotta. Bliss! Anything homemade taste better than store-bought, even if I botch up a job, but homemade Halloumi is a totally different spices from a store-bought one, and Whey Ricotta, well, this is one of my favs but it takes so much effort to get Halloumi out of the way so I have enough whey to make the Ricotta. But that 1/2 to 2/3 cup was well-worth the effort. Because the price of NZ cheese in NZ has skyrocketed in the last... four (??) years, we haven't bought any nice cheeses in a while. This is a perfect cure, as we can make them inexpensively, and it involves four pairs of hand for many tasks. Bliss!

Came Sunday morning and I swear I was going to garden, but I ended up reading more about Shakespeare authorship as well as watching Dr Brown's clips some more. Though I did trim Ben's beard.

I promised Ali I'd post pictures of Brisbane as soon as I finished weaving the Exhibition piece so I'd better start looking at those. Tomorrow, though, I go help hang Changing Threads IV. This Friday, both the National Exhibition and Changing Threads open. No, I don't have divided loyalties; I don't like openings, so I'll probably be in the library or the cinema.

I could not end this post without telling you what else I read this morning. I knew abdominal fat is very bad, potentially leading to high blood pressure, heart problems, diabetes, and I even read, dementia/Alzheimer's.  In yet another old Listener mag, I read that A) it has a name, Visceral Adipose Tissue, or VAT, and B) "(It) is more than just a lump of fat, but is actually biologically active and behaves much like an organ."

Golly, if the thread of dementia was not enough to keep me exercising, the picture of me with an extra organ in my middle, like a bad SciFi minor character, sure is. I'll get on to it starting tomorrow.
Posted by Meg at 3/18/2012 08:34:00 PM