First thing this morning I exercised for about half an hour. Then I worked on the Festival blog for about two and a half hours; happily, this brings us almost up to the weekend before the Festival, so the Committee, (mostly Joan,) doesn't have to worry about the Internet-related stuff as folks concentrate on last minute preparations. Unless there is a change or a big announcement. Or if they totally run out of things to prepare and decide to cook up a post. 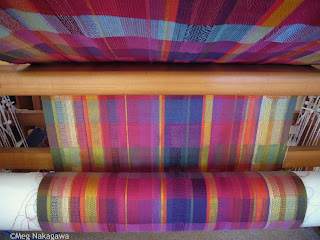 I finished the second piece on the colorful warp and here it's relaxing on the loom. I did the Italian hemstitching again; I'm getting slightly faster but it is still hard to keep the length even. Happily, I don't have enough warp left for another piece, so I will weave some fabric with the remaining warp, This time, I'm going to use only the dull olive green and gold in the weft, I think. 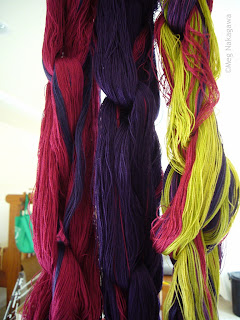 These are three cotton warps I prepared, oh, so long ago. They are narrower, about 12 inches from memory, and possibly shorter than my regular 8 meters. I want to weave more subtle versions of the colorful stuff, either in blocks or in my so-called "Rococo" inspired style. 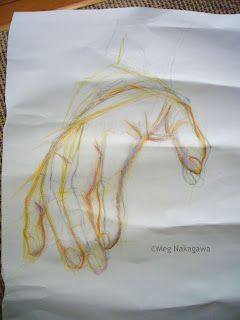 This Friday is the last session of drawing for the term. I did not enjoy this term; extreme closeups of mostly face parts in schematic and line drawings, sitting down with a board on our laps. I'm not that interested in precision drawing any more, and when sitting down it's hard to move away from the drawing so I never know if the proportions are right until the sitting is finished and I can step away from the drawings.

I tried to liven things up a bit on my own; I used regular pencils during the first sitting, and colors during the second. I had thought Ronette told us to swap places to get a different view if we wanted to, so I stayed in the same chair because I liked this angle, and you really can't practice anything in just one sitting, but I copped a lot of flack from Ronette and my classmates teased me. So, sulk! After the break, I wanted to draw the same angle twice again, but I moved. We have Easter off, (Friday class has a three-week break; other classes have two weeks off,) then next term we're going to repeat the details of mostly facial parts but in tones this time. I might like it slightly more, but nowhere near gesture drawing. Sulk! 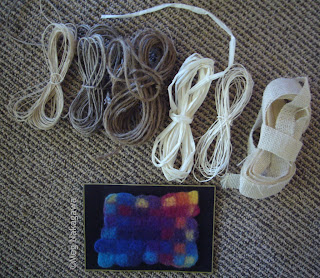 Judy makes the coolest cards, but today I received a pack that was a little different; she challenged me with such fibers as Hessian, paper, linen and jute. I don't think I've ever touched Hessian or jute in yarn form before, and these totally changes my thinking of my project. She said they may not play nicely with the other yarns, but I'm kind of thrilled about the challenge, especially in light of all kinds of lovely, weird, challenging and wonderful things she's been showing us relating to the course she's doing. Thank you very much, Judy!