A near-miracle is taking place in my house today; Ben is tidying the office/study, and even throwing things away! This has been a very contentious issue between us as the last time I remember cleaning that room, and in particular the bookshelf, was Jan/Feb of 2000, and I lost years of sleepless nights over it, caused mostly by my conspicuous book purchases.

I was so ready to start working on my October exhibition ideas in a more organized way, but I even offered to help him when he finished reconfiguring his workstations and moved on to the stationary cupboard. It isn't much of a stationary cupboard lately, and we've been discussing for several years how to make it more Ben's-photography-friendly; he's accumulated a bit of equipment, and we've accumulated a small variety of photo papers. And the whole argument has been about making it more his room than ours, since I've hogged two other rooms for several years.

I found some stuff I knew we had but couldn't find; two being plastic cover sheets, card baking, and the binding thingies. Though I never finished Carla Sonheim's Art of Silliness 1, in spite of psyching myself up a few times intending to, I decided I was going to let it go and not worry about finishing. But I so enjoyed the experience so I'm going to get the holes punched and the set bound on Monday. I'd like to do another of her course, but I can't decide between Silly 2 or Faces 101, (either way, on my own,) and I don't want to do it until I get my next six months sorted, as in rough plans and loose rules. 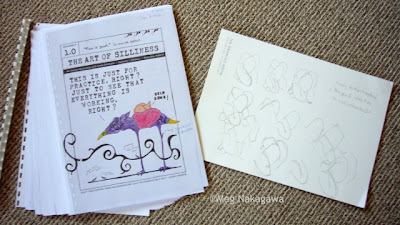 The sheet is the last one I worked in Brisbane inside the Matisse exhibition. I was besotted by a series of linocuts he did for this book and you can see a few more examples here. I was particularly enamored by a very simple portrait of a woman with her face resting on in her arms. Matisse's linocut came with the parts of the face, too, but I loved the woman's right arm in particular and the position/angle of the face but no amount of trying could capture the mood of it. (I've a few more on the back of the sheet without much improvement.)