Hand/Eye recently posted about Tawaraya's exhibition in Washington DC, which reminded me of my mother's favorite, (or mine?) Japanese textile companies: Kawashima Wool (?) Textiles, 川島毛織 and Tatsumura Art Textiles, 龍村美術織物.

Kawashima is a modern business touting environmental-friendliness as well as doing what they have always done; there is a museum, and a "textile school" with a blog. Tatsumura seems to have stuck with what they know best - super fine silk weaving in the Chinese-influenced 7C Japanese Imperial Court-style, though they, too, have an interior fabric division. They have an on-line museum showing cloths that are eerily familiar to me, (click on the tiny ENTER mark in lower right corner,) but their "blog" is a bunch of notices only.

I'm not sure if we had Kawashima products around us, (by which I mean, at my grandpa's house,) but I was aware of Tatsumura as long as I've been aware of cloths. Grandpa had their products all over his house under valuable ceramics, wood carvings, and stones. (We do that in Japan; we get interesting rocks, get it polished if that enhances the rock, have wooden stands made to order , and display it.) Because Tatsumura cloths are so expensive, I only saw what we call vase mats, (Japanese homes always had and still often have cloths under vases, but they are in themselves often works of art. sometimes more valuable than the vases on them,) but I wouldn't be surprised if there were larger pieces and tea ceremony accessories in his house.

Mom grew up with nice things, (though it was most definitely after the way and even more likely after she and her siblings grew up that Grandpa accumulated really nice things,) so I always thought she should have some herself, and when I was working I tried to give her nice things on birthdays and mother's days; one particular Tatsumura cloth among them.

To me, Tatsumura epitomized the woven cloth, and that August day in 1995 when I first threw a stick shuttle on my Ashford rigid heddle loom, images of my favorite red Tatsumura popped up in my mind and in some ways it never went away.

When I went to a pottery show on my last morning in Okayama in Jan/Feb 2010, in a beautifully renovated roadside shop, I was flabbergasted/amazed/disgusted/most-envious that in this rather attractive-in-a-sad-way place were stacks and stacks of Tatsumura cushions similar to but not the same as my favorite red cloth!!! 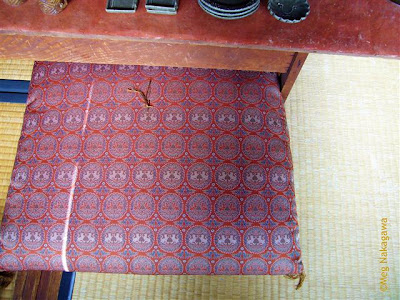 Seeing how carefully I was looking at each piece of pottery, staff suggested I sit down, and gasping, I said I couldn't possibly sit on a Tatsumura. After I made three rounds in the small shop, another staff approached and asked if I am a potter, and when I said I wasn't, she said, "but you must be a maker?!" When I confided I am a weaver, she smiled and nodded. Though she still might have thought I'm just a crazy Kanto-ite, someone from the new East, rather than the old West, Kansai, of Japan.)

When I went home and told about Mom the Tatsumura cushions, she was surprised I loved them so much, and she brought out the three she had and told me to take one; after a few days of oohing and aaahing, and considering declining the offer, it had to be the red one, the one I gave her some years ago. So this is in my special drawer in my stash room.

I should have it out somewhere I can see it every day, but it's such a reverent object I can't get my head around it. So much so this post has taken three weeks to write.

Anyhoo, here it is. 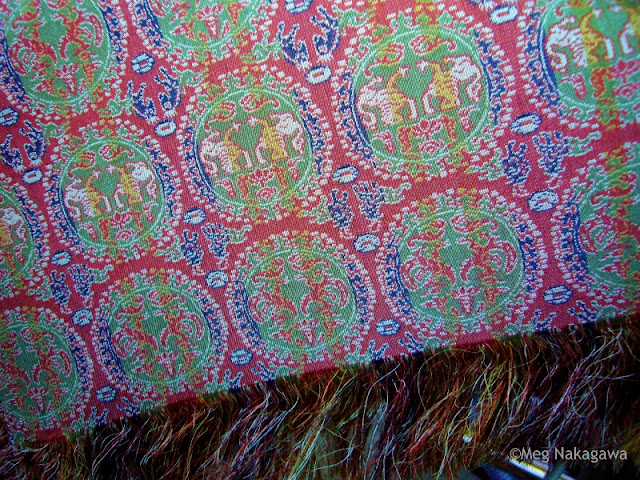 There is no visible treatment of the fringes, but I'm never going to pull on the first weft to find out if there is sometime done, or if the sett and the best keep the wefts in place. 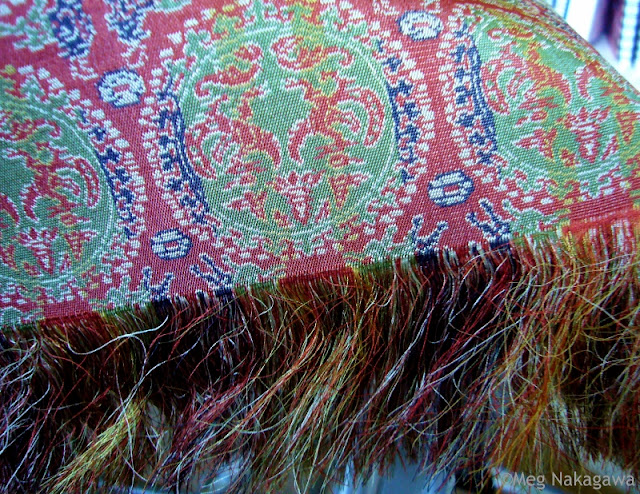