I've made some progress/decisions for "Pillars".

1) I'm going to weave not narrow tubes but banners, (flat pieces), because a)I don't want to sacrifice shafts, and b) I can hang banners in more varied ways than tubes, though these are just examples and I'm not going to hang then in a quirky or "funny" way. 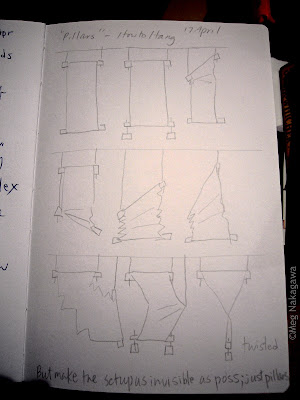 2) Pat let me hang my life-size "models" from her deck railing today, and we both instantly liked the 60cm width, on its own, and in comparison to others. She said something about the proportion made the 60cm look best, and told me not to even think about another live model 50cm wide. Fine by me!! These "models" are 318-319cm long as I thought 320cm would be a good length to hang under rafters 365cm high, but we decided "all the way to the floor" wasn't necessarily a good look, so I'm going to aim for 300cm, or 3m, finished. 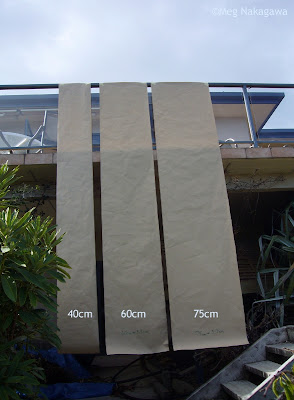 3) I need five pillars; that was both of our gut feelings; each piece big enough to be interesting on its own, but enough of them to collectively do something interesting. So, five pieces of 60cm by 300cm banners, with sleeves for dowels at the top and bottom. I think a 20m warp, minimum. I'm giving myself the whole of May to weave them, but if a 180cm scarf takes four to five days, I'm not sure if this is good math!!

4) I'm going to go for a complicated/pretty look. I haven't selected the structure yet, but it would have to be one that allows me to modify the drafts slightly so I can have three variations; I want the top of the pillar to look slightly fussier/finer than the middle, the middle slightly fussier/finer than the bottom, in the same way Greeks made the pillars tapered to accommodate for... perspective, was it? But without changing the size of the weft yarns, so for e.g. by varying the proportions of twill.

5) I have 7000m of the warp yarn and 8723m of the weft. I don't know yet if this is going to be enough. Just washing several strands, (i.e. no interlacement,) the warp shrank to 87.5% of the original length, the weft, 93%. I put a short warp for sampling last night, just to determine shrinkage and sett and to see if the pattern can be... seen; the weft is only slightly darker than the warp. I started at 18EPI, which is much closer than I had wanted. But I love the color of the warp and how it fulls, (very old wool from Mom's stash,) so I'm sticking with it.

To "enlarge" the patterns so it can be felt if not exactly seen from below, I might have to use a tied weave, in which case as I weave/"climb" up the pillar I may be able to change the color of the plain weft. There is going to be loads of sampling for this project, I can tell. Goody! (But then I'll have to weave the banners.)

6) I spoke to an electrician about lighting; I told him I wanted the pillars lit up like those in Greek ruins and fronts of old museums. We brain-stormed a little, and he's going to meet me and discuss in situ closer to the time, as well as look for LED lights I can hire instead of buy.

Changing Threads exhibition is coming down on Sunday; if I wanted to I could go test out the 60cm-wide "model" in situ, but I feel 60cm is good to go; even when I was cutting out the models, that one felt just right, you know; I should put more trust in my gut instincts. I'll report back after I've done some preliminary sampling. I'll also show you my "doll house".
Posted by Meg at 4/18/2012 07:33:00 PM