I wove off the colorful warp on Tuesday and washed the length yesterday. Here's the second piece; weft ends haven't been tidied yet. This is the one where I wove with mostly the darker pinks and purples because I thought they'd make a better merchandise. 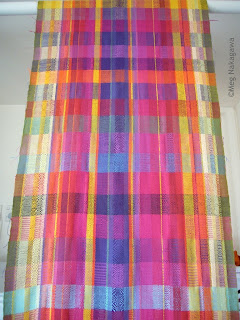 Here, on the stash room floor, (because the living room floor is littered strategically out mapped with wool skeins, cones and balls,) is the warp-end fabric on the right with only the olive green and gold wefts, and the most interesting sample at top left, in which I compared a mostly-light-yellows-and-greens combo against a mostly-darker-purples-and-pinks combo. You can see my second shawl above was a mixture but with the darker wefts in greater proportion. 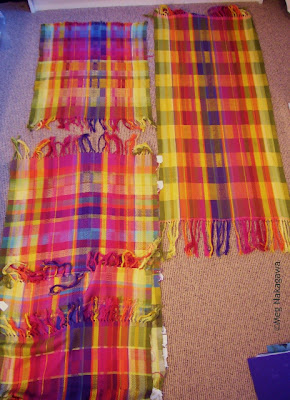 The thing is, in a warp consisting of both lighter-and darker-valued colors, the value of the weft does interesting things. Using lighter wefts make the darker-valued area look bleached out; the weave designs are easier to see, but the center of the cloth is not as nuanced as I like. Using darker wefts make the two sides with lighter warps look scrappy. (Mind you, the hues are different in this swatch, too; you don't see pale purples/pinks in the weft, nor dark yellows/greens in the warp.) When you think about it, is so obvious one shouldn't have to weave meters and meters to know this, but with a colorful warp, it was hard to see the whole cloth instead of getting sucked into obsessing about each little rectangle. The short answer is, I don't like either, so a good mix of values in the weft yields best balanced results, i.e. "Prayers" more so than Eddie's above. But add hue to the mix and the discordance should subside. 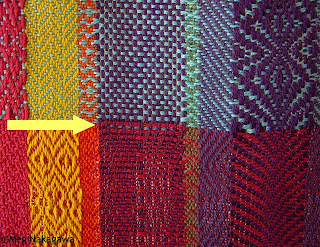 The other problem, of course, was because I didn't document the threading, there are a few of these unsightly boarders between blocks..

As soon as I finished "Prayers", I dreamt of  of weaving cloth more harmonious, so for one day I had the mostly purple warp hanging on the breast beam. But it looked too prim and proper and the pink stripes made the cloth symmetrical, and I couldn't permit such behavior. So being  mildly surprised by my own somewhat OTT reaction, while Eddie's scarf et al bathed in the washing machine, I wound the one colorful warp on the loom. Now, this was supposed to be the highfalutin' color experiment when I made the warp I-don't-remember-how-far-back, but now it's going to be more fine-tuning of what I learned from the wide warp. One difference is, in this narrower warp, each color stripe is made up of pairs of two similar colors, and that's going to introduce a slight divination from what I learned.

Thankfully, all three warps are short; I think around four or five  meters each. I'm going to try 42EPI instead of 40. And this time I am going to record the threading so the boarders between blocks don't get messy.

I can't tell today if it's the camera behaving badly, or my monitor showing totally different colors of the same pictures via Windows vs my editing program, but the old samples in bottom left of the second picture is about right; all the rest seem "off".
Posted by Meg at 4/05/2012 04:22:00 PM