After handling/feeling/ur... examining tiny portions of a small sample to select the weft on the prospective matching cushion covers, we concluded the portion woven with weft=warp is just as soft as the softer wool or wool/silk+wool portions, so in the interest of stash reduction, that's where the dust is most likely to settle. If I go ahead with cushion covers. Especially since there are enough of both wool and wool/silk to go into a scarf, and the wool/silk would be particularly attractive. 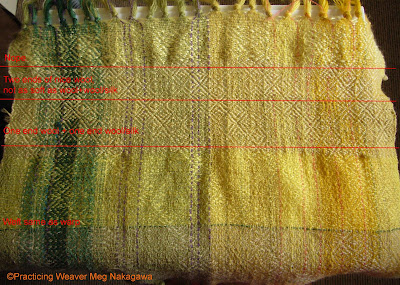 Meanwhile, that gnawing question started to come up yesterday: "What am I doing, just playing around and not 'working' working?" I now have a good answer, "Mine is a weaving practice, not a business, so I'm practicing." I know it makes good sense, so I'm saying it out loud and often enough to convince me.

I don't keep all the drafts I weave, and especially not the intermediate/under-development ones. Some weavers/teachers would say this is so the wrong thing to do, but I get confused having tons of similar drafts and have began weaving the wrong ones that looked so similar I didn't noticed until I felt floats on the "wrong" side or the design didn't change direction. Plus, if I made them, I can always make them again, and I don't feel attached to them.

However, the task can be time-consuming, and I've been regretting not having kept this particular one, because it looks like a healthy pattern gamp possibility. Looking at it this morning, though, I realize it's not hard resurrecting the draft. Good. I can see this in 2/20 cottons, either in vibrant, saturated colors or in neighboring (on the color wheel) hues and values.

An Internet friend passed away suddenly; he's the second in a few short weeks. The first friend, we always knew we'd meet in person and talked it all the time. The second, Daniel, had a weaving school and garden in Flavigny-sur-Ozerain, the village where most of the film "Chocolat" was shot, and again, I had confidence, not just hopes, that one day I would actually go there and meet him.

Daniel's passing, in a strange twist, made me think of a work-friend from the 80's. Yukari was/is kind of serious and sensible and, well, not flippant. At that time a lot of volcanoes were blowing up not just in Japan but all over the Pacific rim, and the weather was just starting to change drastically in Japan and we had a few quakes to boost. While testing a system we were going to install in three weeks, she stopped her hands, turned around and remarked, with an uncharacteristically grave face, "These things make us reexamine our life and values, don't you think?" And without waiting for me to say anything, "I decided it's not always wise to plan ahead or be sensible, so I bought a car."

And very uncharacteristically, I was speechless.

Recalling this conversation made me have another look at how I spend my life. I want to be a better weaver and I want to weave, so practice or working, what I've been doing the last few days is the right thing and I'm on course. In the mid-to-long-term, statistically speaking, (i.e. looking at Mom and Dad,) I have a good 15-25 years of weaving left in this old body, after which it'll give away and if we haven't done so by then, we'd have to get rid of the big loom and move house. Assuming Ben's still around as well. And with that in mind, I'm on course but would like to work a bit faster, and perhaps harder on stash reduction. And travel when I can. And not overthink things. And have fun.