It's been a rainy week so I've had a guilt-free weaving week. Here is the hangy thingie, about 180cm long, so when hung properly, you would be looking at the middle to upper middle part of the yellow bits. 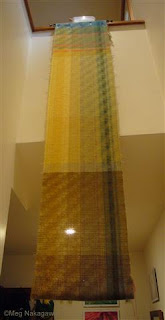 And the cushion covers, woven in two of the variations of the same threading from the more or less resurrected, (though I swear it doesn't look identical) draft. 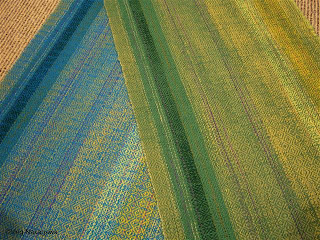 I'm not sure why I did this project, except I wanted to weave, and weave leisurely, i.e. not to worry about every detail as I do when I work-weave, So I chose to weave off one of the very old ready-made (and in this case abandoned) warps and stash reduction. It was enjoyable, and technically, (technique-wise,) woven well to my great relief. The most pleasant aspect was the tracking that appeared at the start/end of each piece where I wove short lengths of plain weave, where echoes of the threading appeared. I'm going to make my next postcard to mom with the unexplainable explanation on tracking today. 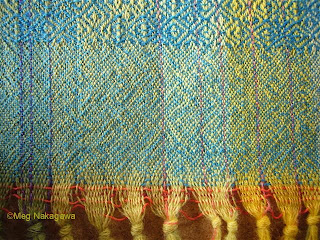 I shall make casings at the top and the bottom of the hanging but the cushion covers will go as they are, because the amount of stuffing inside the four similarly-sized insides on Mom's shelves were, let's just say, variable.

Not having any clear picture of work-related project, (or was it motivation?,) I tied on yet another old warp, this time of dish towels. For one thing I need handwoven towels; for another this project clears both points set out above and frees a few paper bobbins I need for another project. But most of all, towels are so fun to weave.

My fav so far is the ecru-on-white for us - it's a tiny piece as there was little of the ecru yarn left, but I do so love the subtle way the design appears. That's going to be Ben's Coffee Machine cloth. 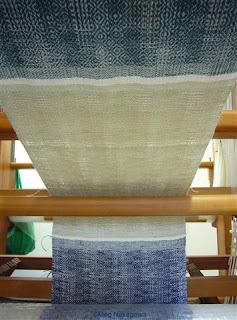 Odds and sods weft candidates for this project. After watching the ecru piece grow, I decided to dip into gray for a bigger piece for us as I know I'm going to love it. And though a white towel would would take a pounding in the Nakagawa household, perhaps I'll weave one of those, too. Other towels will go to Mom as she asked for 10 in... ummm... Jan/Feb 2010. 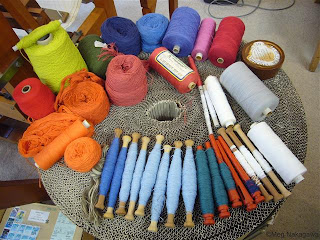 After I got started on the towel, my loom went on a strike. Again. For no clear reason, Shaft 8 stopped lifting, then the software went silly, and then Windows went crazy, and then nothing happened. The situation solved itself after an hour+ of unplugging/replugging/rebooting/changing/rechanging/pulling/tugging, etc., etc., etc. What worries me, as usual, is everything is set exactly as it was before it went kaput so I have no idea what went wrong in the first place nor what fixed it. Do these things happen to purpose-made computer-controlled looms? 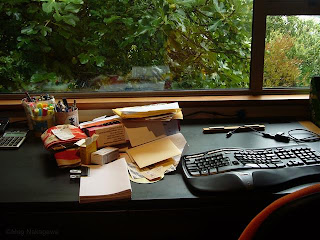