Dad's been gone six months tonight. It appears pertinent to complete this post, started shortly after the Body Image post a couple of hours before the 2011 Christchurch earthquake. I sat on it because mine are trivial compared to peoples' real problems, and yet these are important to me in trying to live well.

The biggest job Mom had for me was to go through my parents' many photo albums and "copy" good photos of Dad on to digital frames for her to give to us three kids. Long story short, I created a master folder on Mom's laptop, copied the lot to mine, and gave my siblings copies on USB sticks so they can view in the manner of their choosing. I picked not just Dad's photos, but Mom's, both of them and the whole family, and some of Dad's with friends, former students' and colleagues'. Oh, and plenty of the grandkids'.

In sorting through the physical and digital albums, I came across so many of Dad MCing or giving speeches at conferences, work dos, and weddings. And in so many of them, he had a big smile looking straight at the camera, or was grossly engaged in a conversation, or was singing, and I only needed to look for the center of activity in group shots to spot him. I reckon about half his time as the Vice Chancellor during the last 15 years of his work life was spent in social/official functions.

After Dad retired, he didn't wish to work part time as is the norm with folks in his position, nor did he have a particularly active social life except with his younger brother, who passed away a couple of years ahead of him. Mom and I criticized him for this; Mom probably because she is such a social person and felt it was unnatural; me because depression runs in his side of the family and not being social is undesirable under the circumstances.

I wished I knew then what Mom told me after Dad died, that he had enough of dealing with people in his life, and he only wanted quiet in his retirement. Had I known this, I would have been his best ally in keeping him cocooned. We shared a kind of performance anxiety that takes over us in "public"; at work, with friends, anywhere outside our house, or inside, any time we are not alone. It's a compulsion, or a duty, to be involved, engaged and interested at all times.

I probably learned this from how Dad lived, but Mom also warned us, (and for once I wasn't the primary target,) we shouldn't be in the living room if we weren't prepared to be pleasant. I also think this is why I, and my family in general, have difficulty sitting together in silence with loved ones. After I married Ben, I had to learn I didn't have to entertain him at all times, and make an effort to stop performing, to get off the clock.

I admire people who are natural. Part of me keeps an eye on myself from somewhere else in the room and observe my performance. It's not that I'm false, I'm not lying, but if I feel my interest waning, I force a certain expression or a composure to make my mind pay attention, to get back into the scene. In school, I was sometimes that kid that asked questions for the sake of asking. And then I used to get in trouble when I stopped performing and became myself; my family still feels uncomfortable when I start being myself.

I can't explain it any better, because I've been this way for a long time, Unless I am by myself. And not rehearsing. Mom notwithstanding, nuns teaching us at a young age about The Big Bearded Man's omnipresence had something to do it it; I used to feel spooked by my personal guardian angel as well; I perceived him to be, (not her, always him,) to be my parents' and nuns' agent spying and reporting on me. So, yes, life is usually tense. It's not a performance for other people's sake; it was more behaving the way I thought I was expected to. And though Dad grew up without the Catholic burden,  he also lived with a lot of self-imposed rules, obligations and expectations. A code of sorts. At times extra effort is needed to relax. What a life.

I haven't found a remedy yet; I am this kind of a person. And I guess I'm not convinced I''m a bad person for it. But I'm glad I live with Ben and get to go off the clock. I'm also glad I work for myself now.

But I wished I knew then what I know now, so I could have helped make Dad's last days less stressful. More natural, relaxed. 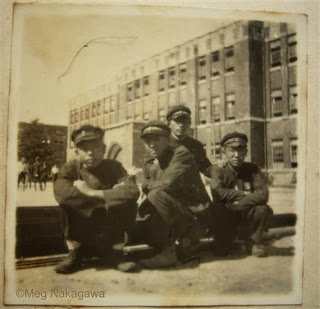 Dad is at far right, as a high school student during the war; I bet, never in a gazillion years, he imagined he'd be a Vice Chancellor at the university occupying a nice office in the building behind him.

EDIT: Just because we are on the clock doesn't mean we don't enjoy ourselves. Once I finally get to where I'm supposed to be, I enjoy most social occasions. It's just that speaking in front of 20 or 200 people, (and in Dad's case even 2000,) where our roles are defined is easier than going to parties or art openings and mingling. I use "I" and "we" interchangeably; observing Dad and listening to his comments, I conjecture he was operating under a similar mode, but I never really asked.

Older friends laugh when I complain about my aging process and give me their "55 is nothing; wait until you're (insert-age)!!" speech. They are missing the point; this is not a competition, but the process of aging, at any stage, and coming to terms with one's own process and living to the best of one's ability within one's own ever-changing parameters.

I can easily empathize with any 30-something who discovers she can't pull all-nighters working/studying/drinking as she did just a few weeks before, because I lived through it. It was in my early 30's that I noticed that my body wasn't keeping up with my mind, and I had passed the apex of my physical fitness a few weeks previously. I remember speaking to several office mates and there appeared to be a distinct difference in those who had kids before 30 and those who hadn't and those with kids, (out of necessity?) had more energy. After several "Oh, ugh," moments over, oh, ten years, I learned that the rest of my life the focus was on maintenance, not improvement.

So I whinge fairly consistently but that's not my focus; I want to learn how to monitor myself and make the most of the well moments, and try to squeeze some productivity out of the unwell moments when I can. Because if I can do that, I can be like one of Doni's friends, weaving at 99!! Now that's something to aspire to, don't you think?
Posted by Meg at 11/05/2013 11:39:00 PM