I was supposed to be in Ronette's all-day-all-week-figure-drawing fest (i.e. summer workshop) this week but it was canceled due to illness in her family. The ill person concerned has recovered sufficiently for us to collectively exhale; thank goddess, he's a young chap! But I don't think he'll be playing rugby anytime soon.

Instead I rejoined Carla Sonheim's Faces 101, also this week, but even though it's 3PM Monday in Seattle, I have not heard peep from the organizers since I was put on the list a while back, nor have they replied to my inquiry, so I'm not sure what's happening there. I did this online course in August of 2011 and really enjoyed it.

I finished my taxes Sunday afternoon and delivered my hot pink binder to the accountant's office Monday morning. Nothing great to report, other than this year, though I was slow in working through it, I didn't feel the usual dread of having to do it. It was quite mechanical.

Which is the reason I'm all the more puzzled I had a mild but persistent panic attack towards the end of my tax work. Very strange; a rapid slide-show like vision of déjà vu that went on for hours; I knew intellectually it was a panic attack and not a real déjà vu but then I started to have déjà vu of déjà vus and just so I don't make mistakes, I had to check things I was déjà vuing about.

I had a bad panic attack once a few years ago so I knew what was happening on Sunday, but what I don't like is the confusion that is like a foreshadow of dementia. A couple of days prior, I took one of silly Facebook tests and I was shocked how long it took for me to answer super simple additions.

Like the last time, I can't think of reason for me to panic about. In fact, last time I had a pleasant afternoon with Rosie going to the gallery, but we also talked about Alzheimer day/wee/month. Was that the cause?

I make so little money I don't legally have to do tax returns, but I do just to stay in the system; (this could be a Japanese thing.) I even get money back from the tax department some years, but always pay more to the accountant which totally doesn't make sense to Ben, so deep down I may be justifying myself each year. Maybe this was it.

Annie was supposed to come in the afternoon so we can take her first sample off and put on a second one. I felt embarrassed by the mess in my stash room, but I would have had all morning to clean most of the house. But maybe this was it.

Anyway, it was strange to think that on Thursday and Friday, even though I wasn't done, I had done enough to start planning the post-tax week. Now I feel hesitant to do anything proactive. I postponed  meeting with Annie yesterday, stayed in bed, ate choc bickies and gazed at the Internet. I didn't even read the current van Gogh book, which I'm otherwise really enjoying.

I'm OK today, just a tad frustrated, flummoxed and annoyed. Sometimes I think I listen to my mother too intently I experience an octogenarian's life vicariously. She doesn't have panic attacks, but she's always concerned her cognitive abilities are failing. We've both had terrible memory for years and she even had a brain scan which checked out fine. 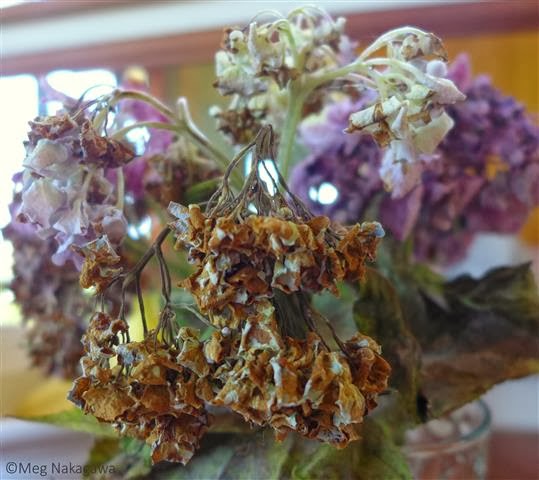 I find it harder nowadays to throw away flowers just because they are not "beautiful" any more. 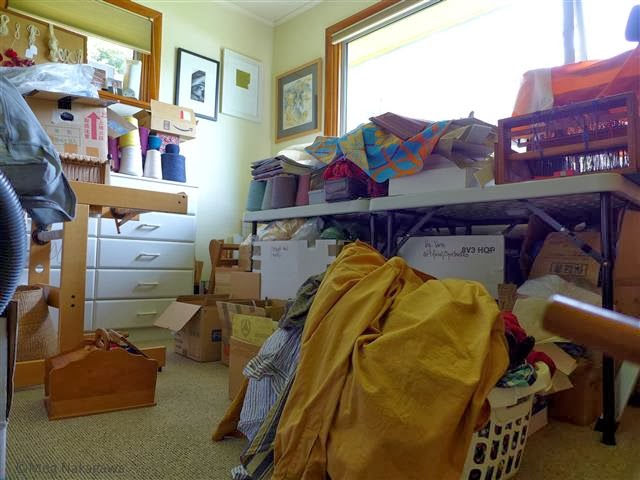 It's not so much the mess, but the amount of stuff in proportion to the size of the room. 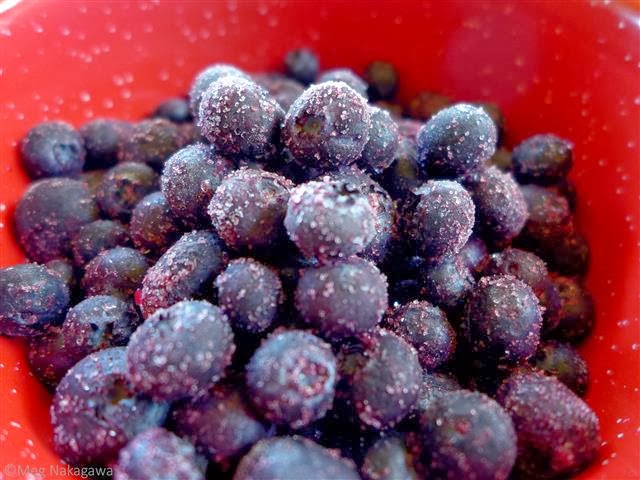