And a Good Day to You 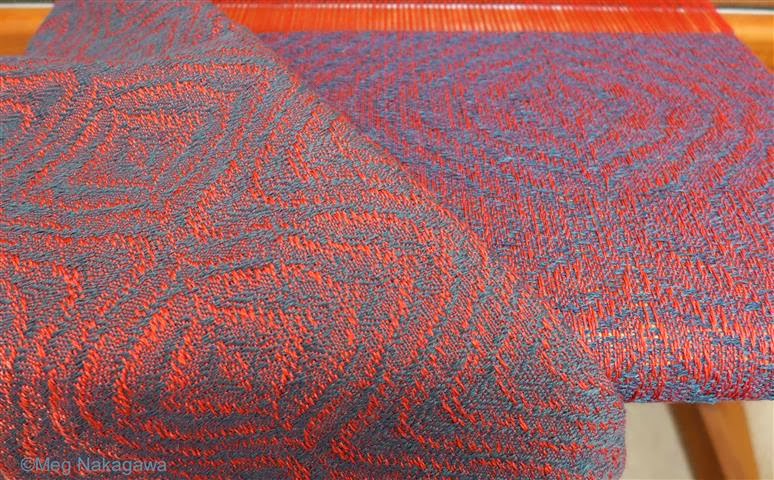 Half a scarf done in less than two hours; a record for me since I hurt my left hand shifting firewood a while back. I wanted to finish the piece but started to sense the usual precursor to pins and needles, so I resisted the urge.

I really liked the complementary colors creating sheen in the previous piece, but I didn't think I had quite enough of that weft yarn. (And I'm bad at estimating the length of yarn using the balance widget.) So I'd been staring at the sample morning, day and night, front and back, until at 1.55PM today, I realized I sampled two teal yarns right next to each other. And I had enough of the other teal.

The last weft was a darker greener teal, cashmere-silk, 2/26; the new weft is bluer, truer (?) teal, 100% cashmere, 2/20. It's less "complementary" and doesn't have the sheen of the cashmere-silk, so the effect isn't as stark, but it does look silvery in different lights. Since I reduced the EPI from 24 to 21, the weft is going in snugly against the previous, so as not to flatten the design.

I still wanted to weave, though, so I made two more tiny bag material. That project is great because I don't have to worry much about the selvedge and each piece is only 38cm so I by the time I get tired of weaving one pattern, I can move on to the next. And the best part is if I don't like the way a weft went in, I step on the right treadle once again and adjust. Lovely.