This Saturday started with thoughts of gardening. Because today is March 1 and I promised myself I'll start gardening in March. Today is a cool sunny day, I could garden, but thus far I've spent almost two hours on the computer, with the telly on. But part of the time was spent looking at a seed company, a bulb company and a plant company websites.

In those two hours, I also obsessed about houses once again. I would like to live in a house with character. Our house was built around 1961, so in New Zealand, these are often too new to have character, (charm,) and too old to be convenient or easy to clean. (Kiwis, think yellow glass and pelmets in every room!) I know if we lived in an older house, if we had money, (and a lot of it, but not unlimited,) it would help, but I also know it's my imagination that is sorely lacking in the first place, and I feel impotent. I know for this very reason, I stopped buying home magazines and watching makeover telly, which were my favorites genres. So I watched an American program following people who converted public/commercial buildings to live in. Except all of them had invested gazillions in them. Good grief.

I'm cross at Dad for appearing only in my brother's dream; baby bother seems to have really good moments in his sleep, probably because he's worked hard especially in selling the house and moving Mom. But so did Sister in one of her busiest times. (Every time a son of hers faces an entrance exam year, one or more of the grandparents need her badly, and she runs, or drives, around Yokohama like a mad woman.) I still regret not being more empathetic to him a year ago, because I was the one who should have, because I am the one that thinks like him the most. Or that's how I see it.

I try not to think about my eye glass situation, that had I looked more carefully, I would not have wasted an equivalent of a nice trip to Australia on a new pair. or an airfare to Japan. Though I don't regret buying the new pair; these are so light and comfortable, even though I may have to get Jim to readjust it just one more time.

And how can I may my Weavers and Designers activities more robust?

That is not to say I started the Saturday grumpy or down. Among other things, while threading yesterday, I wondered if I wanted to simplify the lifting as in yesterday's post. At first I wanted to get rid of the fuzzy parts to make a cleaner design, but now I like the fuzzy parts. So to recap here they are, in monochrome, and the fuzzy bits highlighted. 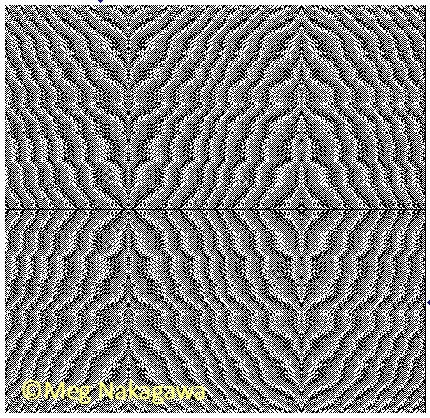 Although having realized this warp is a bit short, I may try weaving the other draft first. I started to edit that, reducing the plain weave areas to decrease the number of times the warp rubs against each other; the top half is the edited version. But with the sparer sett, I'm not even sure if this is necessary.

Right, enough time on the screen. I'm doing something else; anything.