Investigating the Magic Formula aside, I finished the Fancy Pants shopping bag fabrics yesterday. After a detour designing a few Bag II drafts on Monday, and weaving the best (on the computer) which turned out to be excruciatingly boring, 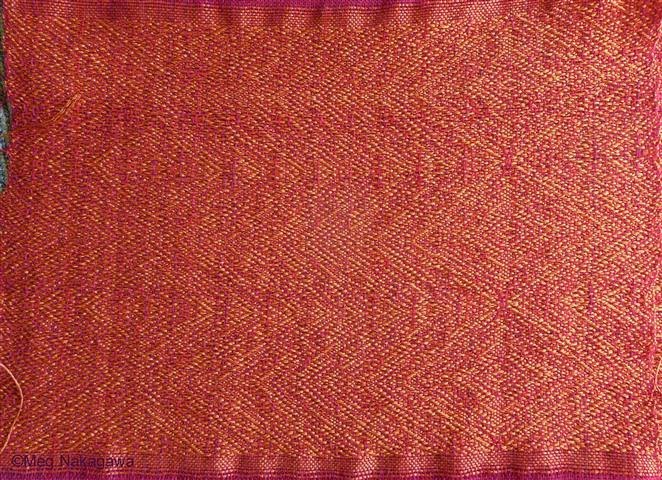 I went back to the first draft. Which was also excruciatingly boring because I wove two scarves and one bag material in a row. Enough said; I'm learning to cut the loss and move on quickly.

The next task was going to be making drafts for two unintendedly similar warps; one I called scallops, (which, in case you did not know, is one of the delicacies from Nelson,) and another last October. They are both eight meters; one cashmere/silk/merino and the other a mix of 100% cashmere and cashmere/silk; to be woven at around 21EPI and 18EPI respectively, 336 and 289 ends respectively; and roughly in the orange/yellow range. And both have colors placed symmetrically. So close enough. 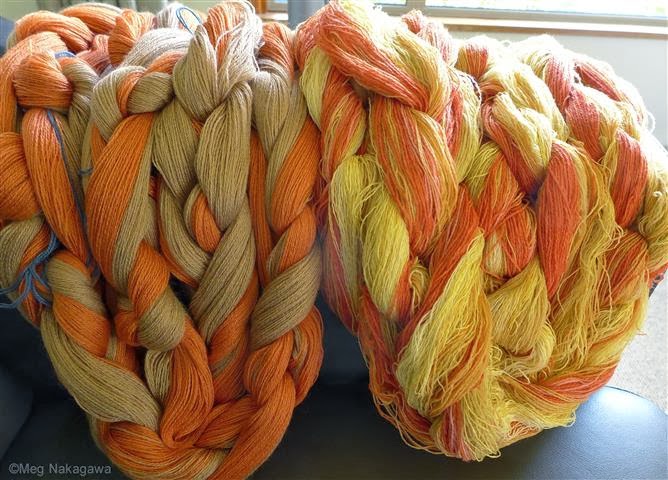 And because of the color symmetry, I've been thinking of asymmetrical and probably not a very systematic, (as in V-shapes moving up by one shaft, for example) threading.

There is a wee problem with the right warp; it was around 7PM, Ben had come home; I hadn't even thought of dinner; it was starting to get a little dark in the house; and I ran out of pale yellow-orange. I rushed to my stash and found a color that looked similar enough, so I used it for six ends and rushed through the rest of the warp. I woke up the next morning and the substitute was screaming, "I'm pink, not orange." It'll happen. Just not today.

Thinking it's going to take a while to concoct the above project plan, I was ever so tempted to put on the gray warp, but put this instead. The gray yarn is new to me and there is much sampling and thinking required; this is familiar Japanese cashmere. 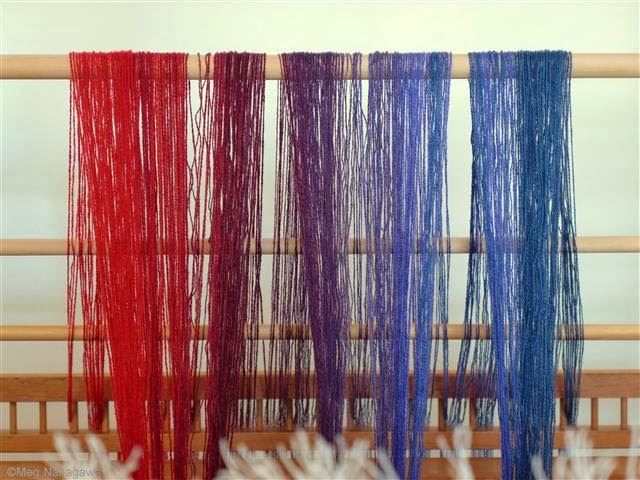 This warp looked unattractive as a chain, but I went ahead because I like the individual colors, and it turns out it's not a bad warp; in fact, it's rather saturated and vibrant for the most part. But I have to make a draft to this also.

I have been telling myself I need to work on Chapter 3 of the design book. The four pieces from Doni's red warp is waiting for me to mend and finish. Garden beckons. And it's mid-March!

Mom had her first family do in her apartment last weekend, celebrating my brother's 43rd birthday and Nephew #1's high school graduation and university acceptance. She now has the Internet, and can open her emails. (Thank you, Sainted Brother-in-Law.) She's also finally sorted out her new weaving space, though students have been coming regardless. And she started to complain about the smallness of the apartment. Hee hee. All is well.

Dad appeared in my brother's dream a week ago Monday and in my sister's Tuesday, but more than 10 days on, he hasn't come to see me. Young Kiwis call this situation, "stink". It's strange to think that while our family continues to grow (old), there will never be any more new photos of him, either.

New Zealand is expecting Cyclone Luci this weekend. I get the feeling it's not going to hit Nelson too badly; these things really seldom do too much damage to Nelson compared to other regions of New Zealand. But we shall see.
Posted by Meg at 3/13/2014 04:49:00 PM