I forgot to tell you about the old Japanese draw system I mentioned. I bet it's not uniquely Japanese, but back home we use it all the time. It's called Amida Kuji; Amida being Amitaabha, Kuji being draw. The system came to popular use sometime in the Muromachi Era (1336-1573) and originally we drew lines, (how do I say this in English,) radiating in all directions from one point, which looked like Amitaabha's halo. 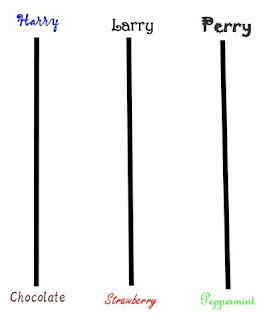 Draw as many horizontal lines as you like, each horizontal line touching only two vertical lines. So, no lines going all the way from Chocolate to Peppermint in this example. (Though there are ways to get around this, too.) 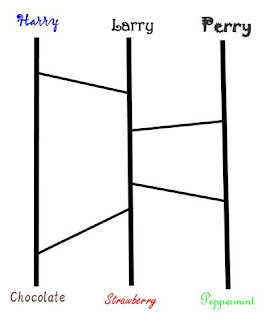 Now, select one participant, and follow his line from the top. Every time he comes across a horizontal line, he must make a turn and follow the horizontal, but otherwise, he must keep moving down. 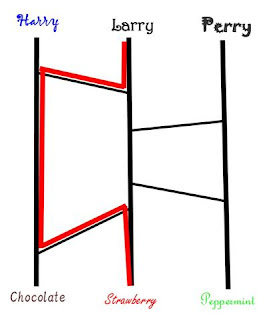 So, Larry gets Strawberry!

The more horizontal lines you have, the more twists and turns you get. Dad used to have a great time handing out small prizes at parties, but he complicated things even more by putting numbers at the top of the vertical lines, and instead of participants selecting a line, they had to draw a number from a porcelain urn or Mom's Navajo basket, and it was my job to go around letting everybody pick a number.

For more info, if you know someone who can read Japanese, knock yourselves out here. The explanation there is a little more complicated to ensure fairness (as in hiding the horizontal lines or the prizes at the bottom, and/or allowing participants to draw more horizontal lines) and a series of prettier pictures with explanations in Spanish (??). There's also a downlodable software to automate the process here, but we'll be doing this the old-fashioned way.
Posted by Meg at 7/11/2008 01:00:00 PM