Mentor Ali comes tomorrow, so I'm finishing my design module for August. This chapter focuses on "fields, forms and fragments," terms I don't really understand in the art context.

The exercises included a lot of collage, montage and frottage (rubbing), where we "slice (paper) with the razor blade... without attempting to make them 'do' anything except move easily and directly." I take it the authors meant don't try to cut out thought-out shapes.

After moving around the pieces, I needed to glue them, and realized I couldn't remember exactly where the pieces were supposed to go, so I photographed each sheet before picking each piece up to glue.

As I worked on the next one, I was surprised as the sea, volcanic cones, and plants on the Hauraki Gulf near Auckland began to appear. To me, this is an Hauraki seascape even though the colors are not representative at all.

The next one is a mosaic where some of the tiles were displaced/misplaced to make the picture a little more interesting. 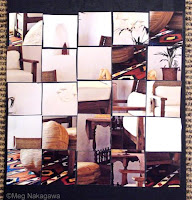 The next exercise were to be a collage of one of my prejudices. I made a statement in protest to the media/fashion industry's definition of women's beauty. Not exactly "my" prejudice, but something I could have think of with the pictures I had.

Photos of prototypically "attractive" women were not hard to find; they were all young, slim and devoid of expression. There are body parts, bikini pics and luxurious taffeta dress in the collage. If you think this is bad in the Western media, Japanese magazines are full of Western celebrities and models who look nothing like the very people whom the businesses intend to target. 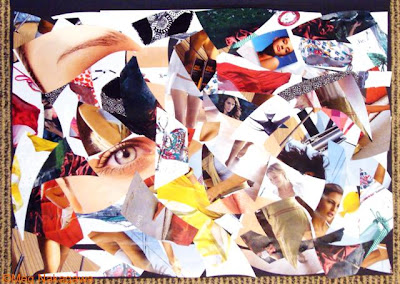 The next is a collage of rubbings I made by putting a sheet of Japanese calligraphy (rice?) paper on an object and gently rubbing the paper with a graphite stick. I rubbed Randy Darwall's scarf, my cotton scarf and a repp sample with a heart motif. As you can imagine you cannot get clear images by rubbing textiles, so I also rubbed a vase and my silver brooch. Then the idea of making a collaged based on the act of putting a price on art sprung to mind, and I also rubbed a $2 coin and my name from my credit card. 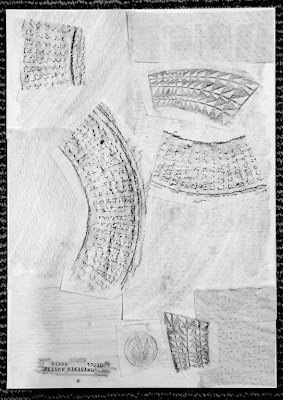 The textile rubbings are in the background, the harder ceramic and silver in the front, to show harder art objects can fetch higher prices. Next to the $2 coin is the shuttle Gavin included in my brooch; can you see it?

Under my name is the rubbing of the repp sample. As you know, structurally repp is (in this case) a warp-faced plain weave, so the rubbing is just that. I wanted to include this because the chapter included what seems to me typical art gibberish I didn't understand.

Designer and critic Roy R. Behrens, in his book "Art and Camouflage", supposedly "analyzed the role of contrast in nature and in art, using the craft of concealment as a clue to the nature of creativity in art. The camoufleur deals in delusions and tries to obliterate our awareness of a 'thing' that is being hidden." Yeah, yeah... You don't seen the cute pink hearts on a white background, do you? I think Mr Behrens said the act of art making is to bring to our attention bits of concealed nature, but that may be way beyond paraphrasing.

I enjoyed making the last collage. The calligraphy paper is almost translucent and delicate and graphite rubs off easily. I don't feel comfortable with the concept talk; writing about why I included the repp sample in relation to concealment frankly embarrasses me. But I did enjoy the process, and I am pleased with the look of it, especially since it took about 7 minutes to make.

The last exercise involved repeating one shape in different ways. 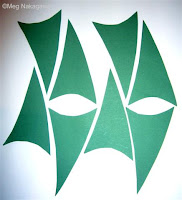 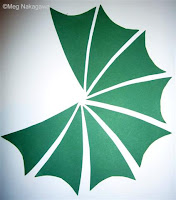 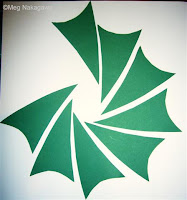 I apologize for the bad quality of the pics. Today has been sunny as the longest summer day one moment, and then gray, dark and torrential the next, and the interval got progressively shorter.
Posted by Meg at 9/01/2009 04:18:00 PM