Group, Collective, What's in a Name?

With the demise of my Textile Lunch group, (which couldn't even get together to ceremoniously disband the group,) other friends approached me with starting up something else in mind, and we met for the first time yesterday.  We had a lovely discussion, unrushed, going off on tangents but managing to come back to focus.

What we decided was that a presentation/lecture-based study group is not what we want, a kind of book club without books I had in mind.  Instead, we thought a "place" to discuss processes (and techniques) would benefit us more immediately; techniques in parenthesis because we are only loosely connected by fiber/textiles.  We will meet again at the Changing Threads opening tomorrow and work towards getting "it" started.

During the discussion, and on another occasion while shooting the breeze with Kath Bee last week, I was asked by other makers why I make things, what it is I try to get out of the making experience.  To be honest I don't really think too often about why I do this, I'm worry more about how. .

In the first instance, I weave because I can, in ways I never could with office work, (no mid- or long-term satisfaction,) writing, (never knew when a piece was finished), or Linguistics, (I am not creative, diligent, or dogmatic enough to be an academic, and I'm not a good teacher.)

I like weaving because it's an art form/traditional technique that has technical restrictions and I must work within the parameter, (i.e. not "free-hand") and this suits me.  The process of weaving is linear, and after a certain point it is cumbersome, sometimes impossible, to backtrack; this limits my option to change my mind and start over from the top; this forces me to finish projects.

I love the finished products, the cloth.  And because I'm a good starter but not a good finisher, I feel satisfaction in reaching the last stages of making a cloth.

And I continue to weave because I want to feel again the immense satisfaction I felt when I took a particular piece off my loom in mid-2007; it was a kind of high I don't remember ever feeling before or after that evening in my life, and it was the one piece  was never in a rush to get rid of.  This is what I wrote to Kath that evening.

"I have one piece I consider to be my best ever.  It's called Tapa, and I wove it in mid-2007.  Put simply, I think the pattern, (which we weavers call weave structure,) colors, material, (possum/merino/silk), and the size/proportion jelled; that the resultant cloth is much better than the sum of all its parts.  It was a hard piece to photograph, but I hope you get some sense of it. 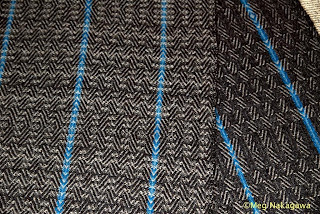 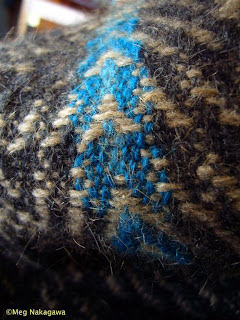 "I wanted to make something with a Pacifika feel, but not associate it one specific island/nation. I Googled Tapa cloth images, stared at them for a long time, but didn't read any texts nor make sketches.  And I just started mapping things out in a weaving software.  I made half a dozen weaving plans called "drafts" and wove, from memory, three of them, but by far this was the best.

"A woven cloth is not finished until it is fulled or wet-finished; this is a washing process, but with some fibers we do what we're not normally supposed to do.  In case of wool, I often dunk it in the hottest water that comes out of the tap, and I agitate it until it felts a little bit. In doing so, the "net" that is the warp and the weft yarns that came off the loom becomes "cloth" for the first time.  So I never know exactly how a piece of weaving is going to turn out until the piece is fulled, pressed and dried.

"With this one, even before fulling, I knew I was on to a winner.  I still remember I couldn't put into words why I thought so, but I felt an overwhelming satisfaction that I made it.

"Since then, I often think of what I began to call 'inevitable cloth'; some colors, patterns and material cannot help but look and feel beautiful when put together, like it was fate, as if it was inevitable they'd come together.  I try to make every piece an inevitable cloth, but so far I've not managed to recreate the satisfaction I felt that day.  But it's addictive, and I haven't given up."

The piece itself had an interesting journey.  It was part of the submission for Re:Fine in Wellington, but the curators could not find a good place for the piece and it was not shown.  Anna held on to it because she still wanted to show it at Re:Fine in Nelson, but something about the dull surface of Tapa, bright lights and low ceiling didn't work at the Suter, so it wasn't shown there either.   Meanwhile, knowing I was searching for outlets in Wellington, Anna wrote an email to galleries introducing me and the kind of work I do.  I had never had anything written about me nor read anything like that and was flabbergasted by what she wrote, but I felt vindicated because she described how I worked on the Tapa series and this piece in particular.  Meanwhile, this is the only piece I withheld from the galleries; it sat on my stash room floor, though I never took it out to study it or appreciate it.  I just didn't mind, unlike everything else I made, it being home.

Fast forward a few years and my parents' friends who have known me since I was three came to visit Nelson, and Ron wanted something special for Puffs' significant birthday.  I wasn't sure what she'd like so I brought the whole lot to their accommodation and left it there overnight.  It was serendipitous that she chose Tapa.  And I'd like to think it had a fate of its own, outside of my control.  I'm pretty sure I talked about this piece several times before.  Apologies.