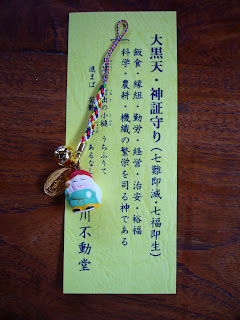 Apologies for the sickly looking photo; I was in a hurry to post it on my family blog to ask something.

You need to know that in Japan we "mix" religions easily, because "religion" is less philosophical/metaphysical, and more a matter of habit/customs.  When children are born, we take them to a Shinto shrine to pray for long and healthy life; plenty of Japanese marry in Christian churches, but at the end, most people are farewell at Buddhist funerals.  As religions arrived from the west, (not The West, because until around 1868, most/all foreign influence came via China and Korea,) they often built on top of pagan and other preexisting customs, rituals, and thinking.

(Do take what I write with a grain of salt as I come from a long line of Skeptics and Agnostics, but then many Japanese are not philosophically/metaphysically religious.)

What's different about Japan and The West is we never had an overwhelmingly strong religion covering up and taking over the older traditions.  That's why we're fine with mixing pagan, Shinto, Buddhist, Taoist, and even Christian traditions and rituals. Christian missionaries have always been suspicious of the commitment of "rice-eating Christians" because even the most committed don't behave like a monotheist.

I'm finally getting to the heart of this post.  Sorry.

My parents recently visited the older parts of Tokyo, and in one of the shrines Dad bought me a lucky charm, as you do, of Daikokuten.  He's a Buddhist guy who found his way to becoming one of "ancient"/pagan Seven Lucky Gods.  He's usually considered the money god, and I'm sure Dad sent this to me tongue-in-cheek because I'm always whining about not having money.

I've been looking at his smiley face for days, but I read the blurb for the first time this morning.  It reads something like this:

(And then in verse) When Daikoku shakes his Lucky Mallet, he proceeds without hardship and obstacles.  (It sounds a lot better than my translation.)

Fukagawa Fudo Do (name of the shrine)

Notwithstanding the blurb-writer's hardship with math, yeah, I mean, weaving? I thought the word had more than one meaning, like perhaps craft in general or women's work, or cottage industry, but several online dictionaries translated the word as "weaving of cloth on looms, or weavers"!!