Learning from Andrea at The Suter the Kayan Weavers are demonstrating weaving at Race Unity Day celebration, four weavers, (Ronette, Pat Spitz, Nola Fournier and moi,) met at Victory Square this afternoon.  It took us a while to find the ladies, they had finished weaving one scarf in the morning and were going to weave no more.

They did allow us to photograph the piece on the loom, (already sold), but they had taken out the crucial two pieces of wood that would have explained how the two sets of warps were lifted.

What we do know are:
Enough words; now for the pictures.  The dark, lovely piece was sold while being woven, but Mama had asked me to buy a piece that would look love on her wall, and Nola and I chose a cheerful-colored one. 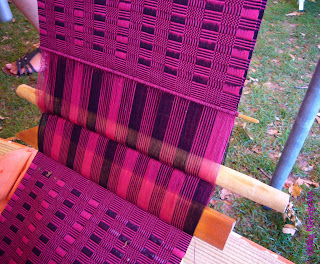 The top part shows the start of the scarf, and the bottom (with the "beater" still in place) is the end of the scarf. 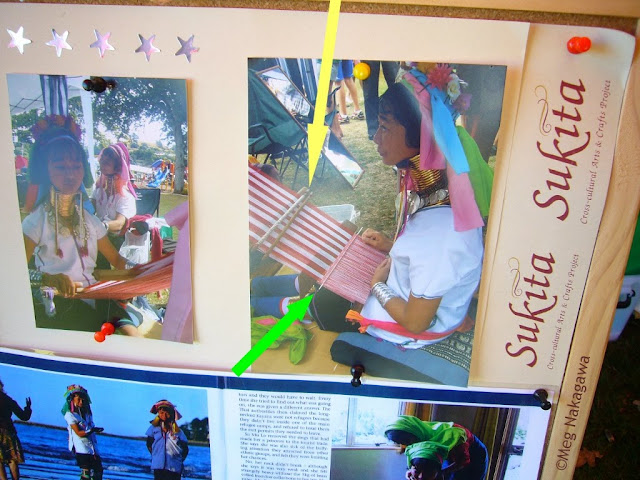 The weaver showed us the two sticks under the yellow arrow, but neither had any strings on them; they looked like smooth, round cross sticks.  The stick at the end of the green arrow seems to me like the bamboo stick inserted at the start of the scarf, but I can't be sure. 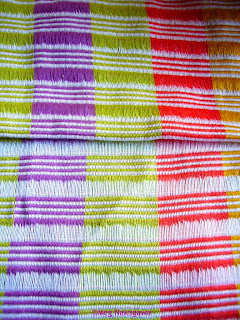 Two sides of one piece. 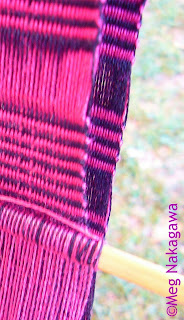 It's easier to tell what two colors are used in the weft in this piece. 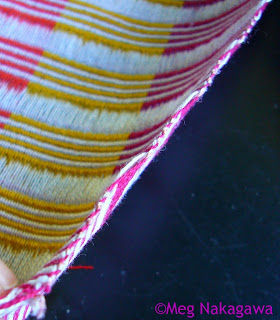 A little harder here; one is white, and the other is a very pale peach color not used in the weft. 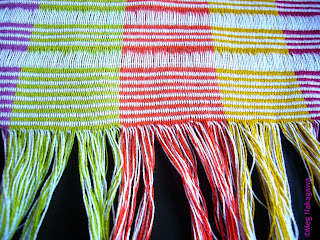 No hemming, no fringing.  I can live with that!

Because I was shameless in asking question after question about the structure of the loom, the daughter of one of the weavers who speaks English invited us to their home to have a private demonstration, so four of us are going.  I shall definitely keep you posted.

The weavers were dressed in their traditional Kayan costume,  but since they spent a decade in Thai refugee camps as "tourist attractions", I hesitated to ask if I can take pictures of them, so if interested, please click here.