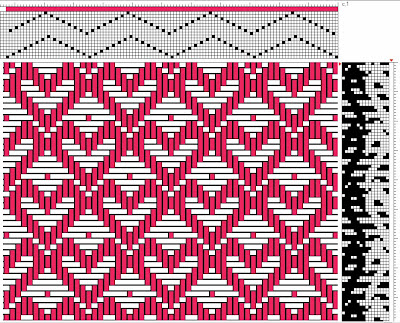 Thursday's sampling shows the weft  I had in mind (A) is the best for the commission piece; this doesn't happen much as I often find something else more attractive after sampling.  Since I have enough warp for two, I'd like to weave one of the grays (B); this yarn looks sad, old and dirty on the cone and even feels scratchy, but fulled, it turns into a sophisticated, lustrous, supple yarn; perhaps it can be dubbed a date/picnic blanket. I found a few threading mistakes so I must fix those before I can get started.  This is the only time I dread having 16 shafts, because it's nigh on impossible to see where the mistake is, to devise a temporary heddle and thread through the eye, particularly in the neighborhood of Shafts 9, 10 and 11.

This afternoon I felt restless and didn't want to tackle the threading mistakes. So instead I wound a cashmere warp on the four-shaft, another potential Log Cabin; this one has two medium navy blues, (I often hear "French" associated with navy blues of this type but I've not looked into the origin/validity of this association,) in two slightly different width. Still avoiding fixing the mistake, I tied on another Log Cabin warp, this one a mid and dark teal, the dark being a silk/cashmere mix.  I've now enough warp to weave between eight and ten small Log Cabin scarves once the blanket is finished.  I haven't threaded yet, but the first one, I might just go for big bold squares of 30 or 40 ends each for a change.

It's been a strange week. I didn't go to my drawing class yesterday because I didn't want to be asked how my family is doing.  My understanding of safety has changed.  And then the family seems to have turned into an average stoic Japanese family and they aren't saying much. at least not to me.  Luckily my brother had a bright idea to evacuate south for a long weekend and catch up on sleep, so all nine are in one of my favorite cities in Japan, Okayama, having an unplanned wee holiday.

Ben and I, on the other hand, spent the week keeping an eye on two live stream television stations, and on tweets to locate articles. Quite a difference from the 1995 Kobe quake that took place two months after we came to New Zealand; we were determined to live without a television in our new life, but that afternoon we rushed to the store and bought the first one we saw.

Panic and chaos after a disaster of this magnitude can be forgiven, but a week on, the government has turned this into Japan's Katrina, dithering and politicking.  I'm also dismayed at the continuing level of support for nuclear power generation, (no numbers, just far more than I had ever imagined,) and flabbergasted at the adoration (??) for the imperial family; we had our own King's Speech video broadcast, which I found, well, astonishing.

As I type, I'm watching tonight's news, and things look a just a bit brighter, helped by the slightly warmer temperatures, good weather, and in some places, a sea of volunteers. I feel less desperate.  But it's going to be rainy and cold again tomorrow, and even during the news, there have been aftershocks of Magnitude 6 with more tsunami warming.

I've also been wondering how I can contribute.  I don't have many more woven items to donate, and for the moment I want to concentrate on seeing Handmade for Christchurch through, because Christchurch still does need help. Understandably, there hasn't been an overwhelming effort in New Zealand, online, for Japan, that I've come across. No "Handmade for Japan" yet.

In what feels like the first time in four decades, (with the possible exception of Kobe), organizations in Japan are calling for goods as well as money.  My first instinct was to buy a bunch of small hygiene products and baby things and post them directly to evacuation centers, hoping the parcel will get through once the postal system is back in service. I may still do this, but it appears people and municipalities in safer areas have started taking action, so I may look to contribute in a different way.

Meanwhile, Sampling has offered two cones of  "yarns with memory" which contain stainless steel, towards Japan Quake Appeal here.  She's spoken about the yarn here, and Shipbuidling wove with it here. Even though the yarn came from Japan, I've never seen nor heard of it until Sampling brought it home from Japan recently.  Anyway, this is a good place for me to start.