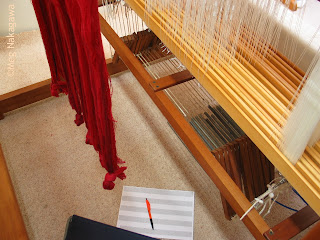 Often when I'm weaving, I chuckle to myself because I'm doing something so old, time-consuming and archaic, in this 21st Century. Weaving is so slow and so low-tech, and other-worldly.

I tried to be light-hearted about threading today, but the wool was slightly scratchy and I was overcome with boredom several times; I had to take long breaks, go away and read a magazine, watch television, and eat frozen yoghurt.