Dyed and Gone to Purgatory

It's been cloudy all day and if it's hard to show you accurate colors on better days, light like today's can't do justice.  With that in mind, in no particular order, along with skeins of the same type dyed previously, (also in inaccurate colors)...

Very scratch Tweedy gray wool of unknown origin; the top of the cone was already yellowed when I bought it some years ago.  This yarn, for some reason, makes the Walnut brown appear yellower than other yarns.  It's still scratchy. 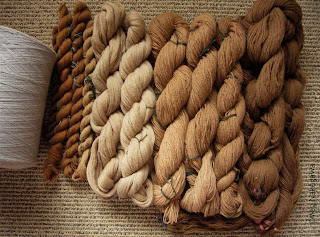 Soft skinny Australian wool of unknown breed; possibly merino, in a criminally unattractive light gray. They are more saturated than seen here, and redder that the previous yarn. I can't tell if there is any correlation between the saturation, temperature or length of time in the dye bath.  But nice.

When I saw the two very lighter skeins, I thought it'd go nicely with a black warp, then remembered a pre-made one. Putting these skeins next to the black warp chain, the black was too saturated and jarring, so I dyed the warp, too. 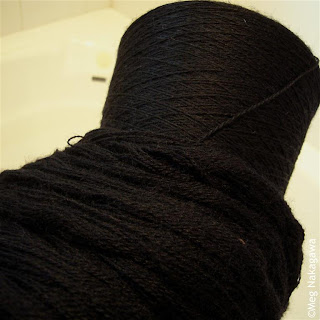 The ever so slight softening of the black of this warp (foreground) made it friendlier; now my problem is, it's an 8-meter warp and I don't think I have enough wefts. Still, nice. 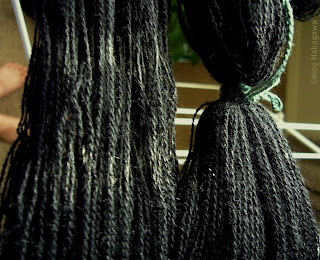 My fav, and another one I can't photograph to do justice.  A lovely dark almost-black wool of unknown origin, possibly a Japanese product, but who knows where the bahbahs lived.  I made a short warp, then tied at irregular intervals and irregular tightness before dyeing, as seen in the right.  Imagine a badly made length of sausage links in your dye bath. I intended the tied bits to act as retardant rather than resist, used old mercerized cotton, and hoped they will come out slightly lighter with gradated boundaries, but the ties prevented the walnut juice seeping through.  The light bits remained "undyed" but both the original and dyed parts are darker than seen here.  This warp, I'll try to show you when it's on the loom, perhaps. 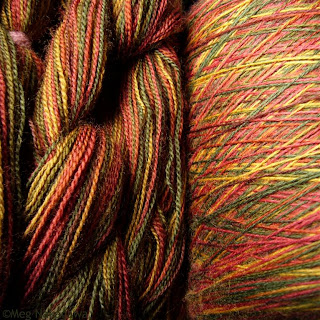 The last of the very bad pics: many years ago I started buying yarns in colors I wouldn't normally buy; autumn colors, yellows, oranges, and greens. One KG of this was the apex of such effort; it looked more muted on the website, but oh-so-in-your-face in real life, so it sat at the back of the shelf for a decade. After I saw how nicely the black warp morphed, I dunked the two pre-measured warp chains that sat in the pre-measured warp drawer for also a very long time. It's now slightly more manageable, but I'm still not sure about what weft to use.

Three more skeins in the urn; the liquid still looks chocolatey dark, but the skeins have sat in the urn all afternoon and not picked up much hue.  I'm not sure what I'll do with them.