After 10 consecutive days of dyeing, I didn't do any today; I was expecting a few deliveries and didn't feel like I can be holed up in the basement. But 10 days of 3-5 skeins daily add up to a pretty good number, and I've been thinking of what all this experience means. Instead of showing you my loot chronologically, I'll show you some interesting, (good and bad) ones. 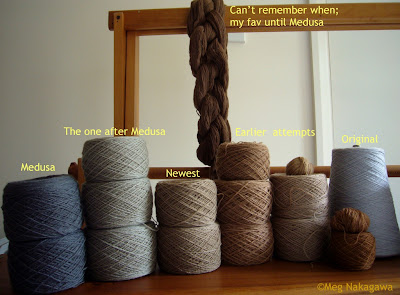 This is my fav; the Australian soft yarn, possibly merino.  After Medusa, I was scared so I didn't boil the solution, and I got a softer olive gray, which I either love, (beautifully elegant,) or loath, (very old looking.)  So I boiled the newest skeins twice, but the color reverted to brown!  I love the color, but goodness me, if I have a choice, I'll take nuanced gray every time.  As you can see, I still have quite a bit of the original yarn so I'm keen to dye some more, and the solution still looks strong, but now I'm wondering why I got two lots of gray and then back to brown again, and weather I should add anything to get gray.  The only possible things that went into the dye pot were very diluted soap or vinegar, but they don't correspond to the dye lots which yielded grays. Any suggestions? 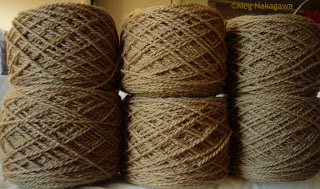 These are rather unsubstantial, (i.e. airy but with no substance,) soft merino, about 8-ply, and the first undyed yarn to go into the walnut husk solution. Considering they were undyed, (a little paler than the photo,) they didn't take much color.  Unsubstantial body and tentative dye job mean I need really good quality wool for the warp for these babies.

I've become interested in the chemistry of wool and dyes, though I keep no record so there isn't much to fall back on. Still, I thought the oxidization of the liquid, through many times boiling the solution, was what made the yarns come out gray, but that wasn't the case. Curiouser and curiouser.  I can see myself spending hours and hours of undocumented dyeing if I didn't have a few deadlines with my weaving this year.

Today was one of the hottest days this summer, and at the hottest time of the day, around 3PM, our new stove was delivered. Not that there was much wrong with the old one: it was a 1989 model, (the same year as Ben's beloved red candy car,) and the oven was 10C cooler than what it said, one hob was either off or all the way up, one plastic handle had crumbled, and none of the parts were available any more.  So we didn't have a handle on the wonky hob; big deal.

Sometime after Ben came back from Japan but before my return, the stove did something that angered him, (who is by far the better and more-frequent cook Chez Nakagawa,) so much, he let me know his feeling (!) on Skype.  As far as I was concerned, if need be, we could have had a fancy, dedicated pair of pliers nearby and lived in peace for another ten years, but Ben wanted to check out the Boxing Day sale on Boxing Day, and I was too sick to argue, so when he asked me to pick one, I picked the least fancy one for one reason: it was a smidgen shorter/lower than the rest, nearly the same as the old one. 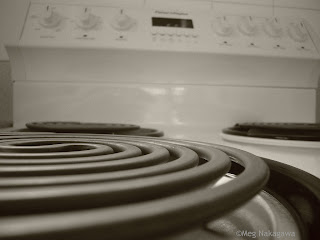 I've noticed no amount of dish washing in Mama's kitchen made my arms ache, but here in my kitchen, just a short time makes me almost want to cream and we figured it's the slight difference in the height of the sink.  When my arms were not hurt, I got back pains after spending a long time in the kitchen, but now I get acute shoulder/arm pains, so Ben is going to build me a step thingie, (picture a very wide footrest you might have under your computer desk,) soon.

All was not lost.  As we disconnected the old stove, Sparky Leroy discovered one of the four wires extending from the wall but inside the old stove just about had it.  I still prefer not to throw away things that still work, (the old one is just going to landfill!), and would have liked to have bought a new couch, or a mattress, or a washing machine, but never mind...   All I had to do was to keep the oven on full blast for half an hour afterwards.

Group R homework. Dis-like. The directive is too Keri Smith, (other members appear to be smitten by her,) and though I like her blog, I find her approach too violent and extreme; I can imagine it being attractive to young folks, but to me it epitomizes the emphasis on the artist/concept/performance, and not the technique. Whilst I can see accomplished artists discovering interesting triggers from her processes, or simple joy, it's not for me for now, so I defied our rules and have been more intentional.

After leaving my rag outside in the rain for several days, I've been dipping/dunking/leaving it in the dye urn from time to time, and sticking it with the rest of my washing from time to time. I have no attachment to the piece, found nothing interesting, and can't wait to be done with it.  The gesso-ed side retains pigments better, (well, doh!) but not the other side; that's about it. 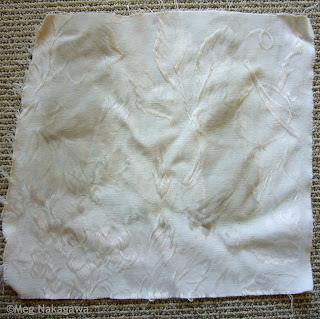 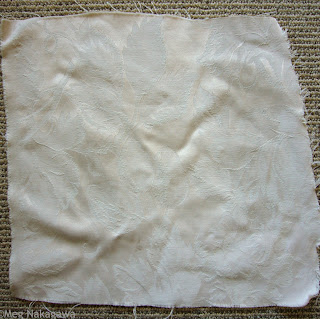