A whole bunch of voices, downloaded, intended to listen to later and gathering like fluff on my hard-drive floor, among them, an Audible interview with Lemony Snicket, all the while trying to quieten what seemed like mounting anxiety.

Working on the loom in the basement helps, even if much too long for the wonky arm. It's almost impossible to control the beating with a wonky arm so these two cashmeres are going to be wonkily beaten.

I finished Tim's scarf yesterday and have been weaving Mom's.  Many of the "weaver" comportments had to be taken out, but I have retained the shuttles, the plain weave cloths, and the requested hearts.

Here's what the draft looks like, though this could have many iterations and utilized for towel swap and such occasions. 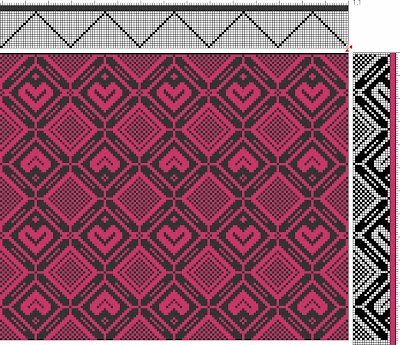 And the cloth on the loom, which is much darker and bluer, but you get the gist. 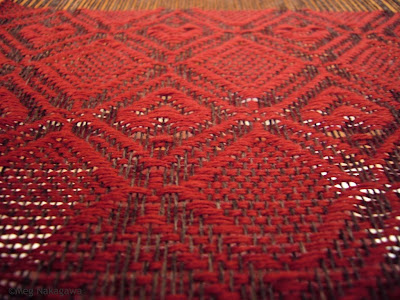 This turned out to be another "live" experiment: I didn't want the hearts to be flattened, but instead of elongating the hears in the draft, I wound a skinner weft in doubles; not plied but two strands together.  It lifts the design and gives a hefty thickness moving away from scarf and towards cloth, and since I haven't sampled, I don't know what the warp is going to be like when fulled.  But Mama is always complaining of the cold, so it should be alright, even if it won't be as soft as what we've come to expect from our cashmeres.

I shall weave a long one, and then have less than one scarf left on the loom, so I'll cut the warp and move on to the National Exhibition piece, whatever that may be.