Who AM I Kidding?

I got so frustrated after two bits of 15+ minutes of weaving, I went ahead and finished the repeat and then did one whole repeat totaling in 40 minutes Thursday night, and boy, I knew I done myself wrong! Then Ronette's drawing resumed yesterday, (she's looking great after the big surgery three months ago,) and I really wanted to draw the 10-minute sitting with my left hand to make abrupt, unintended lines.

Let's just say, to make the most my foreigner's English, "pins and needles in the coffin". But it's fantabugroovilicious to be back in her class, and I had noticed that three years on, certain types of drawing have finally become easy and emotionally everyday for me.

I have been noticing I've been putting on even more weight since I've come back, and I'm seriously afraid of getting on the scale. I never developed a waist, so my equatorial region remained pretty much the same between Age 0.5 to mid/late 40's, with the gradual addition of a couple of bumps above. Gradually all three have succumbed to gravity, and I have become a member of a particular shape. 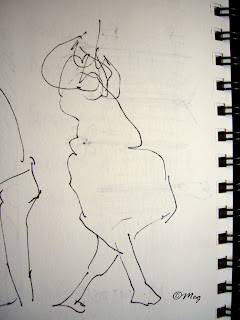 That my parents have told me, in unison, when I was nine or ten, I would never be conventionally pretty, but I could work towards looking intelligent, that my dad cannot stop talking about my weight, that my mother has been dismayed at the way I don't try to dress nicely has no doubt contributed to my wanting to be a virtual person sans casing. In my defense, gym staff, doctors and nutritionists have not been able to figure out why my intake/output/remaining mass is so badly balanced; I'm so green and energy efficient the only consolation is, if there is a famine, I'll be one of the last to go.

Here's a scene that crops up in my mind from time to time; the thing is, I used to see it as the origin of my not being hostage to brands, labels and fashions of many kinds, (brands in Japan have always baffled me,) but with my mother's insistence that I'm simply lazy about looking nice has changed my view.

In the fifth year of school, when one is between 10 and 11, my convent school had the tradition of hosting the first overnight trip. (There may have been one a year until we graduated at 17 or 18.) It took part in early summer for five or six nights, staying somewhere cool in the mountains, hiking, visiting historical sites, cooking outside, and the favorite, the last night's big camp fire. From what I understand of American kids' summer camps, it's close but a bit upmarket, no craft, more being bussed around for educational purposes.

The school being a strict convent school, we had strict lists of what we could and very specifically could not bring, and strict criteria on how "fashionable" or "common" our belongings could be, i.e. no  Snoopy, Disney, or Miffy, and I don't think Hello Kitty existed. Mama and I blindly followed the rules, Mama having gone to a sister school and understanding the aesthetics and values the nuns expected. So the night before the trip, she worked into the wee hours sewing me JPs. I don't remember if I was involved in the selection, but it was blue-gray cotton with tiny white stars in the conventional shirt top unisex style, perfect for a rugged week in the cool mountains.

Unbeknownst to us, friends and their mothers had different ideas and it was in the PJs they invested their identities; most were store-bought, but there were lots of frills, ribbons and laces, in pinks, reds and whites. One girl in particular, (not an academically successful student but great on the piano, a quality given equal kudos in my school,) was the talk of the camp with her frilly, three-quarter length set with lady bugs (crawling) all over. It was also my first brush with a mass prepubescent hysteria.  To make matters worse, I was one of the first to start menstruating in my year, three months before the camp.

Rules dictated we were not allowed to brush our teeth or wash our faces before 6 or 6.30AM, but long before that we congregated around the loo waiting for our turns; I of course was scheduled to have my period about then, so I had a wee case with my "thing", and of course the meanest nun spotted me in seconds and balled me out. And I could not say anything because it was more embarrassing then to admit to having periods than to be balled out in front of one's entire year.

I was the girl in the least conspicuous of PJs, (or so I thought,) and I felt a big yellow star burn on my chest. Sincerely, no offense intended; it's just how I felt, possibly because the style of my PJs reminded me of the countless docos I watched with Dad. I heard my classmates' silent collective gasp and sensed their imperceptible retreat creating that declaratory gap around The One In Trouble.

At once I hated Mama for making me look so opposite of good and nice; I hated myself for not loving anything Mama made; I hated having periods as if that were another vice nuns had on their checklists; and I hated everyone for loving NN's PJs, because it really wasn't that cute. Worst of all, I could see my parents reprimanding me, in unison, "they are them, we are us." Goodness me, I can still imagine Mama's quick dismissal and Dad just unable to let go of my weakness in character.

So, where am I going with this? Well, Monday is our next Group R meeting, and there is a chance we'll do this thing about personal colors; not the fun 80's stuff, but apparently figuring out colors that suit based on colors existing on one's own body. (No, absolutely no rude stuff.) With a supersized body image issues, in the company of four white women, one a svelte 20-something Scandinavian, if the Group thinks we're going to discuss body part colors, I'm so torn in two over-disucssing the pros in cons in my head.

You could say I've kinda been holding my breath these few days and turning purple or blue-gray with small white starts all over.

EDIT: again, no offense intended by "white" women.  I sat on this post for three days wondering what term to use. In NZ, there is a word, "Pakeha", but some folks in that group think it's derogatory and the rest of you wouldn't know who they are; to me, "European" excludes American, Canadian, Australian, Kiwi so it doesn't work here; and neither does "Caucasian" because nobody I know come from Caucasus.  And I sure wasn't going to say, "women of European descents"; goodness me, that's a mouthful. Words to denote ethnicity is somewhat a touchy issue in Kiwiland, it seems, especially for, um, this group.

Which reminds me of an incident at university; I had a wisdom tooth that inflamed suddenly and something like four or six hours later after I started to get an eye-watering headache, I could not open my mouth wide enough to stick a straw. None of my friends had cars, so two of the boys went knocking on the door of an Iranian student living on the same floor of their dorm. Said student was a nice guy anyway, but he, ummmmm, interrupted an amicable Sunday afternoon with a lady, threw on some clothes, and drove us to the emergency dental clinic. On our way home, he reminded me we're both Asians and I wasn't even to worry about gas money. I never saw folks from the Middle East as fellow Asians until then, but I got warm feelings all over, and that was the start of my being friendly with a whole bunch of folks from the very dry lands.