Hello, again. I got back last evening from Brisbane. And Brisbane was... big, bright, and expensive, but more about that when I get around to picking out some photos. 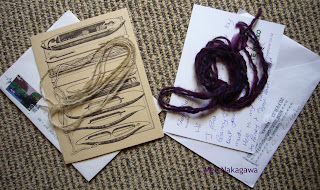 As soon as I returned, I found two more envelopes waiting for me. That's Margery's merino/alpaca/tussah silk and Gaye's Pukeko-inspired wool. And would you look at what New Zealand Post did to her return address?! Thank you so very much. And do please keep them coming; I could use some more.

I couldn't sleep last night, metaphorically speaking, because I realized there are only 29 days in February, and I wasn't going to make the March 1 due for National Exhibition entry paperwork. Thanks to technology, though, I scanned/emailed the form, and direct credited the Guild account so I ended up getting it in one day early! I was pleased the descriptions came so easily; I can only hope the weaving goes as smoothly. 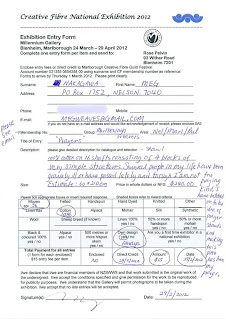 I can't read the description in the photo on my screen so in case you have as bad eyesight as I do, I'll add it here:

"100% cotton on 16 shafts consisting of 4 blocks of very simple structures.  Several people in my life have been gravely ill of have passed lately and though I am not the praying kind, I have latched on to the idea of prayer shawls and making this piece has been my prayer."

It's not exactly fluent writing, but you get the point, and well, it as a little more than the space allowed so I feel OK about it.

Invigorated by having finished the paperwork, I went downstairs to continue threading. There were a few counting mistakes when I made the warp, alas, and after two of the three chains threaded, I'm short two ends, so it's a good thing I added four extras at the end of Chain 3, anticipating something like this.

I had a method to my madness in the way I changed colors; each color had a number of ends matching one of the schemes I had in mind; multiples of 4 for straight or Dornick threading, 7 for V- or A-shapes, etc., etc., etc. I changed my plans as I threaded so there are a few pointed threading blocks that isn't symmetric, for example, which might cause the selectors to reject the piece on grounds of "too many technical errors", (though Marlborough folks aren't that narrow-minded), but I'm forging ahead because life is spontaneous and you do the best you can in the circumstances you're given to the best of your ability, and I like that my approach is not contrived this time.

We'll see if I still feel the same once I start sampling.

Oh, I finished my wee project for February; it was to post one picture relating to my work every day. In August 2006, we joined the City Daily Photo group, (well, I did,) and solicited Ben's help, but I quickly got bored and Ben's been minding Nelson Daily Photo pretty much solo for the last five years. I wanted to get back into photography, so I tried this, and it was a good discipline, but I didn't feel the love for photography that I get once every few years. I'll explain this to you in depth in the near future. Time to concoct another wee project for March.