"Professor, Father, Patient" continues to morph in my head, but I'm glad part of it is finally out of my head and in the real world. 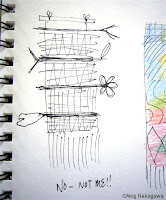 I knew what I didn't want, and that I still wanted to use weave structures as my main means of expression. I also decided to use what remains of a warp I made for an exhibition in October 2007 called "Culturally Routed". (Some pictures here, here, here, and here. I had to take it off after weaving as much as I could for submission, then put on another for a commission, from memory. I decided against good judgment I'm not rereading post related to the Giant Ribbon as I find that act more embarrassing than listening to my own voice on tapes. Irresponsible, I know, but I'm running with it - or away from them.)

Suffice it to say, it's a shiny, coarse, relatively fine wool that is visible from reasonably afar, remains relatively stiff, and relatively fussy structures can be made, and I have a few colors of it left.

But I wanted to widen it, and at first I thought to add browns on the right, with a few ends of aqua and purple, and yellows on the left with a few in-your-face peach-pink ends. 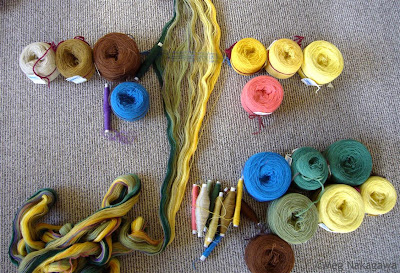 When I went downstairs on Wednesday, I made the yellow side first, which went well.  I didn't count, I didn't plan, I just spread the original and additional warps once in a while to see if it looked... nice.  Then I worked on the right side, and I felt there was not enough strength to counter balance the saturated yellow on the right, and created a pretty wide aqua area, and then kind of fizzled out with the browns.  The photo below was taken Thursday morning, and I can tell you in the afternoon, the most saturated part of yellow is more brilliant than seen here.  Anyway, A is what I had at the end of Wednesday, and I didn't like it. 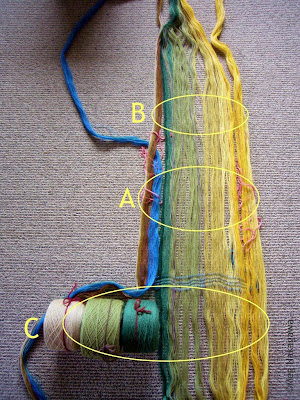 Came Thursday morning, and I felt I had three choices; I could keep the aqua and add more of the middle, gold-brown, (kind of visible if you enlarge the photo,) and some of the two on the sides; I could take out the aqua and add browns or not, B, pretty much the original plan; or I could take out the lot and make the warp more symmetrical and fade out, using greens, C.

The problem is,  (or is it?) I have very little of the darkest green left, so I can't make it more similar to the yellow side; I feel most comfortable with C, and that whatever irregularities I create in the weave structure can be seen more easily with C or B. I also am reminded that this no-planning is really hit or miss, and when it misses, a complete do-over becomes necessary.

I don't know yet what kind of threading or lifting I'm pretty sure I'm going to include deliberate threading and weaving mistakes, and the weave structure will morph from simple to more complicated in perhaps three to five steps, returning to the initial simple step almost abruptly at the bottom. Or should I see his birth at the bottom and now at the top? And then I started to think weaving this in fine achromatic, dull gray would also be very interesting.