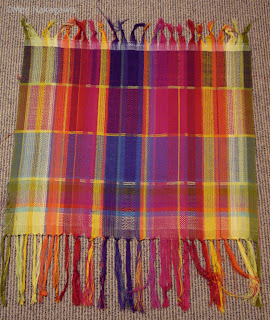 Apologies for the shocking photo. Ben and I tried but I ran out of patience, so I've declined Ben's offer to bring out the heavy guns to shoot this sample.

I resleyed 108 ends at left selvedge at 42EPI (right in this pic) to see if it would solve the stripe problem, which it did marginally, but not in the straight twill part. It's so annoying, I have a whole bunch of barber shop poles in this cloth. I also investigated my reeds, and saw that Mom's Japanese reeds have skinner blades (?) than some of my non-Japanese reeds, but I couldn't tell if the 6-dent reed currently in use was fatter or about the same, nor do I have a Japanese 6-dent reed. I could resley the 2/20s at 40EPI and the thicker cottons at perhaps 30EPI, though I prefer not to. Undecided.

Though instincts told me 88 picks would be about the right length for the longer rectangles, when I counted the first fulled sample it was more around 100, so I made drafts that changed after 100 picks. (Do you see one shot of pink in the dark purple rectangle? That's the 88th shot.) Both seems too long to me. What I noticed was that within the longer rectangles in yesterday's sample, I change the weave structure. So I could either have long rectangles with two different weave structures, or I can change colors at around 4cm; I'm leaning towards the first solution.

In addition, the alternate long and short rectangles appear so boring compared to yesterday's sample, so I might introduce another size. Or not.

I tried to create bright ribbons in horizontal damask, but I used a 5-end damask (!!) so I got some sheds where all the warps in a particular color stripe were up or down. Back to the drawing board, but if I can have fake-damask areas in 4-shafts, (I know I'm supposed to use strange numbers or some such; I read up on it years ago when I only had a 4-shaft and an RH,) it would create a nice contrast to the almost-all-twill cloth. I am happy with the horizontal ribbon being 8 picks each.

As regards weft colors, looking at the two samples, I decided pretty much all of my pink/red/purple yarns can be used in the larger rectangles as they tend to recede; all yellows and oranges, no matter how they look on the bobbin, must go into the short rectangles. Greens proved a little tricky and will depend on the colors preceding and following. There is one cream color which greatly displeases me for not fulling. At all. Though I cannot be bothered taking it out of the warp, it is not going in as a weft.

I also made simple knotted fringes, and knotted the end as well to see if I could cut off the second knot to get nice, untangled fringes. It worked, even without the first knot.

With the combination of 21 inches at 36EPI and 108 ends at 42EPI, the cloth on the loom was 57.5 cm wide and 55cm long.  I put it through one cycle of regular hot/warm wash, but not in a net bag because though I have a bag large enough for this sample but not for the real piece. It is now just short of 56 cm wide and 47.5 cm long, (though they may shrink a bit more as they are still damp,) and the length required 440 picks.

I can't remember the exact term, but when I was a student I remember being offended by a term/phrase I believed to be originally scientific used in economic context; it was something like something of maximum return, and meant that after a point, no amount of additional investment would bring in more profit, so the implication was, no use investing in the products, process, staff or customers. I thought it was outright unethical not to always strive to make improvements, (and still feel that way to some extent.) However, as regards fine-tuning the drafts and the color orders, I think I have reached that point. Technically, I can go back and record the threading and plan each square, but I haven't got the time nor the will. I'll try to make interesting drafts, but I don't want to over-complicate my task, and I will still need four days to weave the woven part.  This is, after all, a combination of very simply structures woven at random as much as my setup and psyche allows.

With that in mind, I have only tomorrow to:

1) Decide on the sett and resley if necessary.

2) Create drafts containing designs around 60 picks, 20 picks and 8 picks, probably, keeping in mind that I can weave from the top or the bottom of the draft, so each draft, with directionality, (is that a real word?) could act as two. Sample and measure to see if I like the size.

3) Decide roughly what kind of a fringe I will made, to decide how much warp I need at each end.

4) Consider the weft color order; at this point I'm leaning towards putting bobbins in either the Long/Receding/Quiet or the Short/Loud container, and picking colors as I go.  The greens will have to go to a third box, but I like them, and hope to use them. The middle-sized rectangles, if I decide to use them, will depend on the context so I will choose as I go.

I'm by no means disavowing the other approach, of precisely (or, whatever adverb you prefer,) planning colors, threading and lifting so I know exactly what each rectangle would look like, as well as the whole piece, to create tighter and more precise kind of cloth. I happen to be the kind of person who does get a kick out of this kind of exercise. Sometimes.

I'm enamored by my sample pieces, though. Usually after a project is finished all samples go to my special samples basket drawers, but these two, I might just cup and make something for myself, overlong floats and all.
Posted by Meg at 3/03/2012 09:39:00 PM