Sample 3, and No Rest for the Tardy

Reed Marks/Stripes
On careful inspection (by Ben) my 12-dent reed (from the US?) also had skinner blades/separators, but my 6-dent reed had thicker blades, resulting in these three choices:

I wasn't sure if A) would improve the situation much, since the size of the blades will remain the same, and a dent in a 10-dent reed is much easier to see than in a 12-dent reed, (B), so I went with C), fiddling around where 2/20 are adjacent to the thicker cotton. Oh, that pesky pale cream that doesn't full, that was sleyed at 50EPI.

In addition, I put yesterday's Sample 2 in a hot, regular rinse cycle and then in the dryer for about 20 minutes but did not see any improvement. Which was kind of a relief as I hate the thought of putting mercerized cotton in a dryer.

Drafts/Structures
I did not make new drafts/lift plans. I altered my test patterns aiming for 44 or 88 picks each. I did not create more complicated lifting, either, because the way I see it, most days in my life are same-old-same-old but it's the slight variation that makes a big difference, like a Tui came to my banksia tree, or a loaf came out great even though it's the same old recipe in the usual setting on my bread maker. Things like Brisbane trip doesn't happen to me too often, so I wanted to stick to structures like twills and basket weave.

Here are the three lift plans with four variations each, plus two variations of the short 8-pick part.(I can show you only the lift plan because I don't have the random threading documented.) And you can see how easy it would be to modify them as I go. 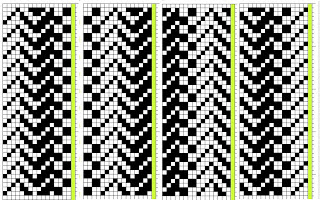 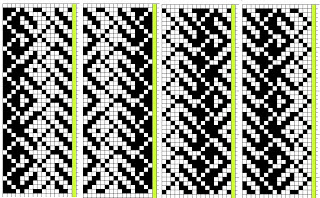 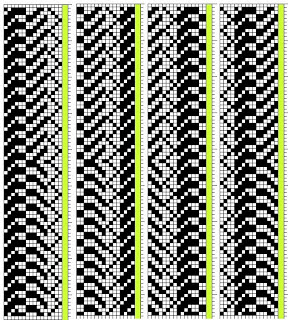 Two faces of the short rectangles, shown here with 16 picks, but woven 8 picks each
Because so much is left to random, unseemly floats, not too long but not pretty, pop up every now and then. Based on today's sample, I rethreaded six ends; this only guarantees there won't be too many blatant floats if I use the same lift plans in the same order. 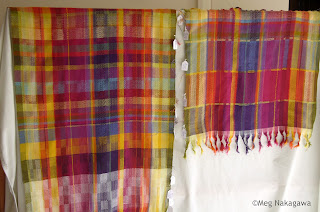 I'm deciding on the draft as I weave, referencing the structures in the samples. (The tags specify the draft variation.) If I get bored, I can start the draft from the other end, or change face, to create yet more slight variations. For the short rectangles, (not necessarily all 8 picks), I can also use one of the first four varieties. And I can still alter a draft as I progress. 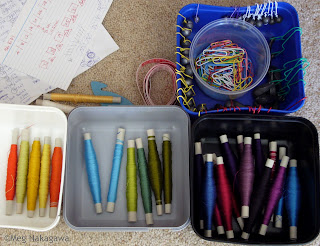 Dark, Depends, and Light containers; I am choosing as I weave. 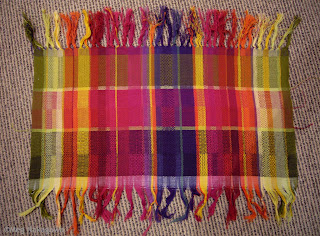 52.5 cm wide and 26.5 cm long on the loom after weaving 291 picks; washed in hot water/regular cycle, steam-pressed, and almost dry, it's now 50.5 cm wide and 25 cm long. And I have reached that "something of maximum return" place.

The sample is too small to know accurately how the hand differs from Sample 1, but it feels heftier, which I don't dislike. Reed marks negligible if you didn't hear/watch me go on and on about it, though they are still there.

I'm not sure if I still like "Prayer" as the name of the piece; it's more like Shakers shaking, Quakers quaking and African Americans singing and dancing to their fabulous Gospels. I'm warming to the idea of changing the title to "Hallelujah" but we'll see how the final piece looks.