I've about 500 picks to go on the Pillars for the exhibition, plus some warp left to weave something shorter to hang somewhere in my house, most probably the wee door in my studio. It feels good.

I try not to thinking about the look of our exhibition as a whole. We still can't tell, but we don't seem to have as many big works as I had hoped for. At the very least, I don't have the second, colorful something to hang from the upstairs office, under which visitors can walk. Once I prepared a bunch of links to interesting textile exhibitions and tried to bring the matter up but another member thought I "didn't trust" the others in the group to create works of integrity, and the discussion went south. The ferocity of her anger was so that I've been afraid to bring up the subject, and once we tried it, it was a softly-softly reminiscence on which exhibitions (in Nelson) looked nice or who (in Nelson) can hang exhibitions nicely, and we never delved into factors that might make a textile exhibition memorable.  Or drab/homey.

I don't know if you would describe this feeling as "worry". I can tell you the individual works will be interesting and well-crafted. And varied. I don't know how we're going to work out where things go, except I have first dibs on where the pillars go. And for some reason I always pictured in the far corner from the entrance of the big gallery, the dark corner, where special lighting can be effective. Except it's not as dark as I imagine in my head. 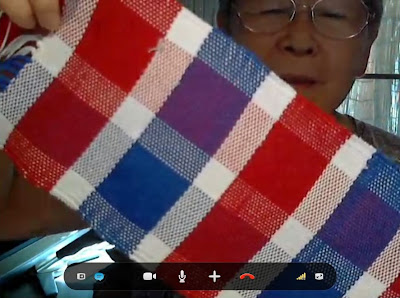 This is Mom being a proud Grandma last Sunday while Skyping; the cloth was designed by and partially woven by my 16.5 year old nephew. He and I didn't get along forever because I thought he was like an untamed animal and he didn't like me cracking the whip of discipline. And I was the only one. But shortly before he hit 14, he's become a rather nice young man, and all of my sister's sensitivity and her tendency to take interest in things began to manifest in him. I told him he's turning out "Super OK" when I was home in 2010, and he returned a shy, smirky "Whatever."

Recently he came and stayed with Grandma and Grandpa for two nights, an utterly rare thing, during which time he must have watch Grandma weave for the millionth time, and apparently the conversation moved on to moi.

The grandkids have always watched Grandma weave, so they know roughly how things work, and they've all tried some kind of passing/throwing of the shuttle on her knees on whichever loom happened to be dressed on the day, but he took a special interest in the design process, so Grandma made him come up with a design, ("Based on the French flag," he declared,) explain how to make the warp based on his design, helped with the loom dressing, and explained sampling. After he started weaving, Nephew decided skinner white stripes between thicker blue and red stripes, rather than same width in blue, white, red, looked more interesting. Mom promised to weave a table-center-like cloth to go on a credenza-like piece by the window in Sister's living room.

He wove only about 15cm but it was a full afternoon-plus spent with Grandma concentrating on one task, and a meaning, fruitful, and memorable one for both. Mom finished the sample so in time for our Skype appointment.

Finn told me that in the museum context, underwear are called "foundation garments". This instantly reminded me of corsets and the various "shaping" lingerie Mom and my aunts wore and compared, and never cease to recommend to me.  Finn and I also talked a little about looking good, looking appropriate to one's class/station in life, showing off wealth, and comfort. My mind keeps focusing on one issue, though: where and when did men have to modify body shapes to fit the aesthetic conventions as much as women? Outside tribal tattooing/scarring or encasing/hanging-from-the-neck of the male genitals, I can't think of any for men. So have women had to change our appearances to please elders and men more because we were often their properties? Has anyone read anything??

I've been thinking about good voodoo, and if there are any historical/anthropological precedences. You know, voodoo/magic/which craft have been employed to harm your enemies in the first instance, or to bring luck to oneself and one's group in case of white magic. I guess there are prayers,  but I wonder if there were ever voodoo where we wished someone great luck, possibly a specific good fortune, possibly from afar, and I wonder if I can weave/make them with textiles. (There are things folks do in Japan, like not drink tea until so-and-so accomplishes this-and-that, but this feels to me more like praying. It's most definitely like Lent.)