Real rain today and a little wind. It feels so soothing after a dry, windy spring, and the last few days of humid, Japanese-summer like afternoons. I have slept well these last two nights.

2014 was focused and fragmented at once: I got some mad-intense weaving done from October last year to March-ish, then came the trying-to-get-something-for-a-drawing-exhibition madness, followed by getting-ready-for/travelling-in/finishing-what-I-started-in Australia madness, culminating in a sporadic but enjoyable weaving rush since September-ish. The two in the middle not weaving were intense because of unfamiliarity of the media, watercolor and acrylic, but I enjoyed the newness, freedom/unplanned-ness, and relative speed.

Weaving, of course, I enjoyed though individual stages/pieces were often infuriating. I evaluate my life by weaving output; the more pieces I weave, the better I'm using my time on the planet. Because I can't measure quality. But looking back from a wee distance I'm glad I delved into other things because they certainly helped me, especially in trying out new color combinations and proportions/distribution.

In between, I gardened a bit, probably the most I've done in my life in one year, but I'm not effective and I kept working in one same, tiny area. Seriously Kafkaesque. And funny it I weren't me.

Ben and I were inundated by a series of minor health complaints; it was almost funny how as soon as one problem went away, another popped up. And though we don't lead especially unhealthy lives, we can stand to exercise more and eat a little less.

Although at languishing, slightly injured snails' pace, we have also begun to tidy and shed, so long may this continue.

2015. I have the usual suspect lined up in the back row; I'm  afraid to drop them because they have been on my lists for ever like bad habits, but not have I made any serious efforts: dye, spin to weave, look into exhibition/s outside New Zealand, or engage in little-everyday projects. While I'll keep these in mind, I'm going to hold myself responsible for two things, my part in Weavers and Designers, and reduce stash, weave, weave and weave. I think both are doable. 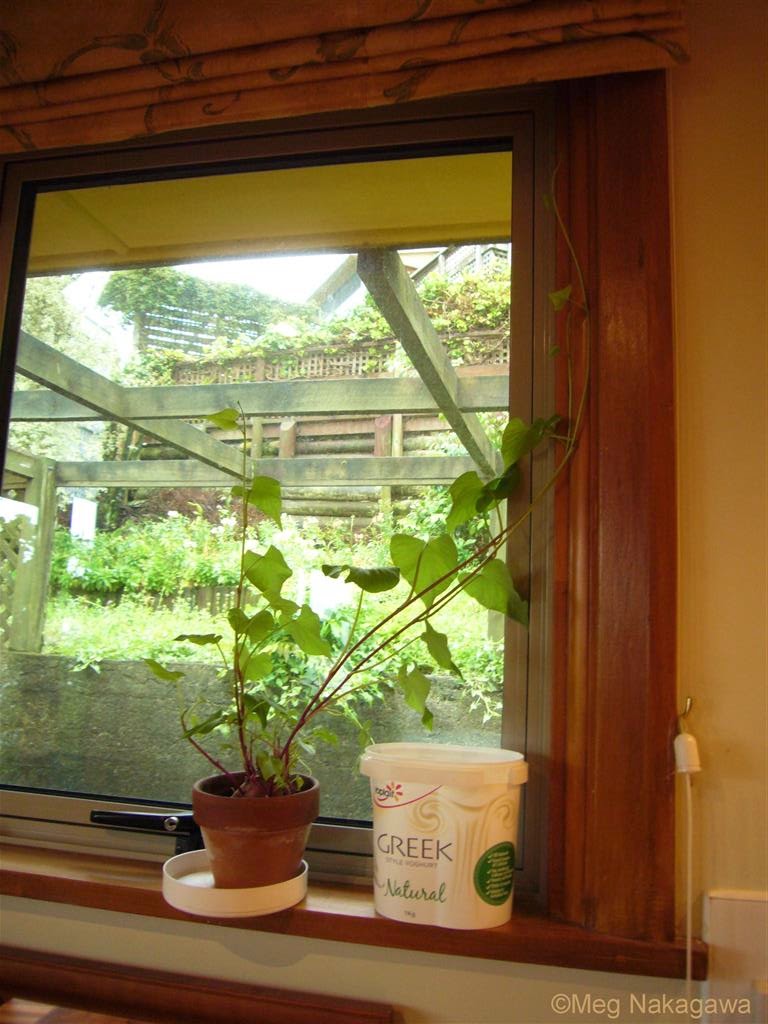 I swear the kumara grew 7cm overnight. I kid you not; it few at least 18cm in three days. I've known it needs to go into the ground but I haven't found a position deep enough so I might use a pot made redundant earlier in the year. The yogurt container contains alstroemeria seeds from when I had cut flowers in the house.

It's a little after midday on New Year's Eve, but I feel reluctant to let go of this strange year just yet. I recall a palpable foreboding and a forced enthusiasm for 2014, which turned into a prodigal year. For 2015 I have no strong feelings, which I take as a good omen.
Posted by Meg at 12/31/2014 12:28:00 PM