Boxing Day was the biggest Let Down day as a kid, but as I got older it's turned into a Big Relief day, even if we don't do anything. We've survived another. And this was a strange one.

The festive season started when I baked tiny orange cakes for a street party in early December, and then we cleaned the house holiday-style, (i.e. a bit better than the usual,) and even put up Christmas lights. I think I told you it doesn't get dark until around 9PM around here so the lights have been on for a very short time but we enjoyed it for a few nights, and a few more night to come.

On Monday Ben had a yearly Diabetes check with a nurse and got a glowing appraisal, so glowing I felt very uncomfortable as I've felt he's been a bit complacent in his monitoring. (It also has to do with the GP's attitude and changes in government funding.) We were supposed to go to a big 50th birthday dinner Tuesday night but he looked tired all day and had a long nap; when we were supposed to be getting ready, I begged him to check, and his blood sugar was sky high. So, no birthday dinner. I've been making him check several times a day since so I get a sense of what his "normal" is now.

What really annoys us is, we had enough sweets in late November and early December so we haven't had chocolates or cakes in a fortnight; we're not eating special meals but lots of veg and small amounts of normal protein sans sauces/gravy, or anything festive. Ben doesn't like my gluten-free bread, no-added-sugar jam, nor yogurt, and he won't go near my kombucha except the occasional coffee konbucha. (The last one I'm not bothered about; more for me.) So Christmas Eve day and Christmas Day all day we drank a lot of water and tea and ate veg-laden meals in the heat. Christmas Eve at 8PM was 26C in our living room; Christmas Day 9PM was 28C! (That's very hot for our house; very cool for Yokohama.)

As if I needed to add to the craziness, we had saved a lot of cooking show Christmas specials and watched them these last two days. Most were English shows, so a lot of oven-cooking, which were easy to ignore, but a not-Christmas episode of Nigel Slater's show had a nice stir fry and silly me, I cooked stir fry in the searing heat last night, and reheated bean curry. Silly, silly me.

Ben's gotten on his exercise machine several times for short periods, but in general, we feel unfairly accused. And we still can't figure out why his blood sugar level comes back down normally after brunch but not after dinner, when we've been eating very similar meals. But this is how the disease is progressive; what worked in his 40's isn't enough to maintain the same numbers. Got to read some more.

The monitoring hell continues, but we did catch up today with the birthday boy and the Mrs; in fact we went to the last The Hobbit movie, my very first 3D film. It took me a while to figure out the sweet spot on my glasses first, and then a good match with the 3D glasses, but I can see the attraction. After a while I started to feel sea sick, but maybe we can get seats in the back row another time. And it was lovely to catch up with our friends as they live in Melbourne. 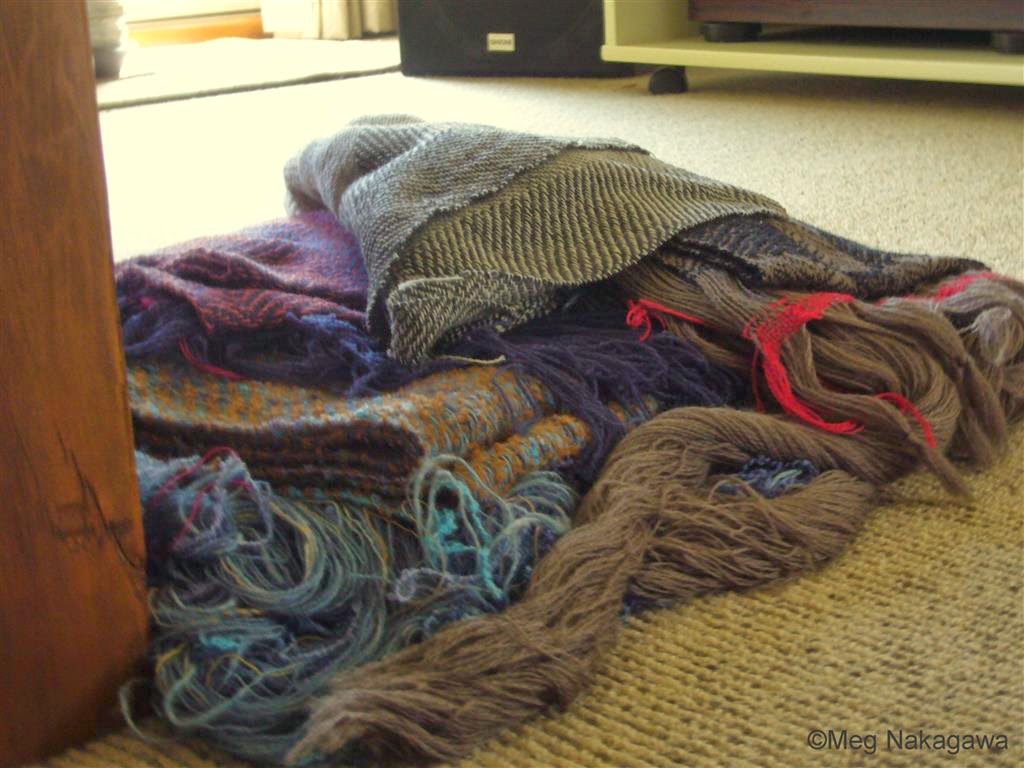 I've felt a little weaving withdraw; I've had stuff to mend, fringe and finish sitting in front of the telly but I don't feel like touching wool in this heat. So some cool work session in the basement would be most welcome.

Today's my parents' would-have-been (or is it still even if one is deceased?) 59th anniversary. Next year my family will see 60th, 25th, 20th and 15th anniversaries. Yikes. 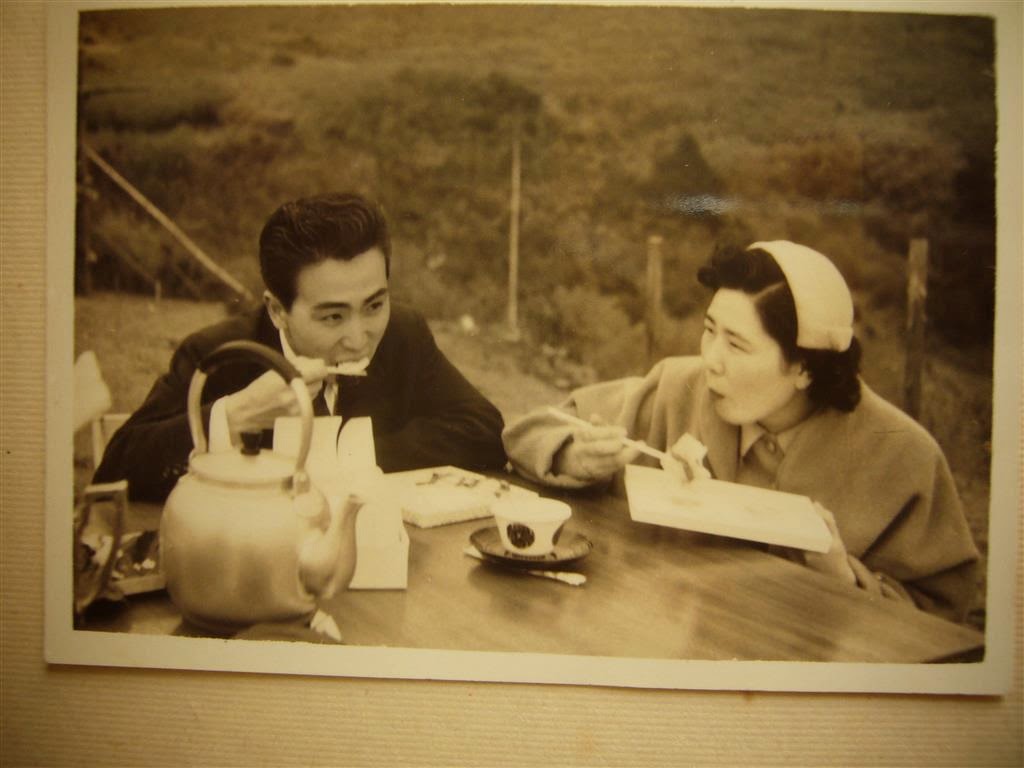 On a chaperoned day out after their engagement; 1955. 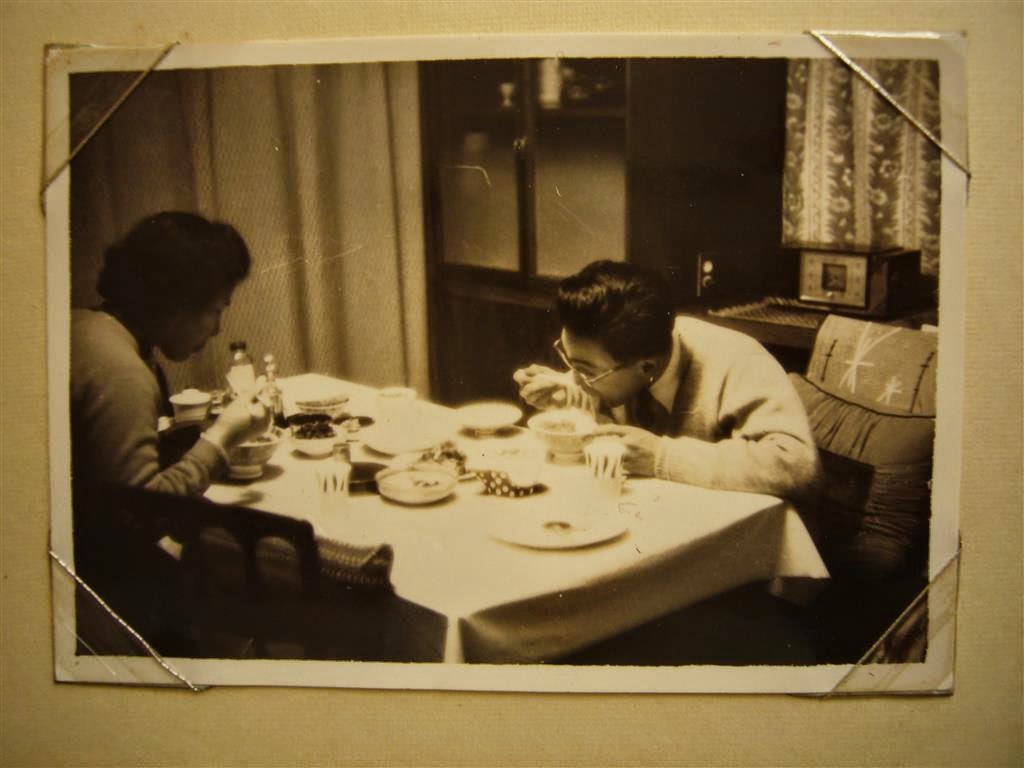