Ben Called it a "Birthday Scroll"

I started writing about this a while back, but since it involves a birthday, I thought it better to hold back. I've been quite pleased with myself about having come up with this idea, though.

Two Saturday morning ago, Esther asked if a Friday night two weeks hence, i.e. tonight, we'd be free to join her birthday dinner. We were/are. I'm "scheduling" this post, so by the time it goes up, we'll be chatting away at a Mexican cantina in town.

I wanted to give her a small cashmere scarf, but to weave it for her specially, and knew the earliest I could get around to it would be Christmas, but most likely much later. So I had this idea of a "card" roughly the size of a small scarf; I cut/pasted a piece of brown wrapping paper and started doodling/collaging, with a promise of a cashmere and/or merino scarf, "of approximately this size, in the design of your choosing within the weaver's grasp and colors of your choice within the weaver's reach," or some such, "to be completed by your birthday in the year 2020."

I think I can manage. I'm also happy to be retired tax-wise; I can use/mix purchased-for-business and purchased-for-pleasure-or-gifted-or-rescued yarns without measuring and calculating their $ value and putting them in the correct columns. 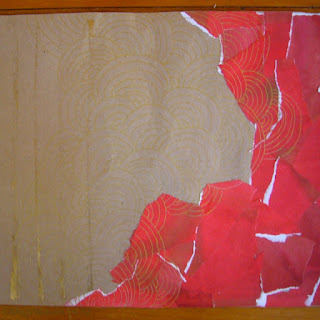 One of my fav parts don't show up too well... See the gold swirls?

Ben called this a scroll so I tried rolling it up but the water-color-painted collage part, the red part, was too stiff so I went back to the original idea of folding and stuffing in an envelope. The project looks childish, but then she's a museum art educator of students so she's used to childish art, I thought...

Last night's presentation by Stella was fabulous. She brought some of her pieces, many of which I had seen but I got to look really close up, and handle in some cases, and some I didn't know about that informed me more about Stella's making.

Ronnie and Maria were there,  Sue was there talking about a new way to wear my wraps, (in bed, especially when you're not feeling great, which is something I've recommended to many; try it if you have one of my softer pieces,) and good neighbour Duane and Barbara were there, (and gee, we like them a lot.) Ronnie and Barbara are involved in running these talks, and I can now hitch a ride with Barbara if I want to go to future sessions.

Stella touched on art vs. craft for jewelry making, but when I asked how much she thought of the practicalities of a piece, and she said none. One of the "fine lines", (my word), for consideration for her is "to sell," (assuming the buyer wants to wear it,) or to exhibit. What's that for us, for me? My first thought was something-to-wear vs. something-decorative, although... a decorative that is reasonably flexible/wrappable that is of reasonable size would be the equivalent of gigantic or spiky-things-poking-out kind of ring. For example.

Maria and I have been hatching a plan, to get (back) in touch with makers to talk about making, but Stella does a lot of collaborative work and curating, so there may be new components to our future discussions. We and my friend Alison, a painter/dress-maker, are powwowing at my place in a fortnight. Ben might bake a cheesecake for the occasion. :-D

I cleaned the basement yesterday, after much dithering. And I'm glad I did because it was worse than I expected; there was mold on the walls of the far side of the room, near the single-glazed window and door. Not a lot like we used to see in the house before upstairs were refitted with double-glazing, (I was wiping at least twice a week,) but then we have the shower we use more often downstairs, and I think I'm correct in saying we had more cold days and more rain this winter. None of these would have mattered had I been going down regularly, like I do other years; when I find something fishy, I clean as I go, but this year I used the upstairs shower much later into autumn just to avoid going downstairs.

Should be OK now I've washed the walls with vinegar, but Ben's going to move the drawer/desk thing so I can wipe behind that, too.

I also have too much wool downstairs, stuff I had planned to use up by the end of last year, and you know the more breathing room you give wool, the more they expand. I can't believe all of that used to occupy one-half of the big box upstairs; now they don't come near fitting in another big box. (And the upstairs box is full without my adding.)

Over the years I've been donating yarns that weren't nice, but kept everything of reasonable quality/size/color. I changed my mind yesterday and decided to further give away yarns I won't weave with. Some are too harsh, and while I lament parting with them, (mostly old-style weaving yarns with scale left on!) but they will be better served by someone who repurpose them, and I'll regain space and peace of mind. I hate having to label my pieces car/boat/camp/cabin-suited to mean, to me at least, they aren't as soft and lovely like my "usual" stuff.