We canceled a session in early May because I was sick, and since then I thought she has giving up on me, and she thought I had enough, but of course I'm not finished. So Ali came over for another session today.

First I showed her my P2P piece; I stressed how color choices, threading and treadling were decided spontaneously/randomly, but I got the feeling they weren't random (in the final result) enough for her. Something she pointed out was the blocks came in two sizes - either wide or narrow, the wide being about 12 or 16 ends, and the narrow 4; she wanted to see a wider variety. I complained I was stuck planning the next block piece, because I could not be more spontaneous/random, so the only thing I could think of is to weave another of these. The problem was later resolved.

Ali felt vindicated about recommending Summer & Winter because it wasn't as fuddy-duddy as I had thought, and I could see possibilities with the structure.

We moved on to my design book exercises: Chapter 5: Line and Form. I struggled with this set. In fact, I read the chapter on December 20 last year, but didn't start on the exercises until almost 4PM yesterday! Here's the lot. 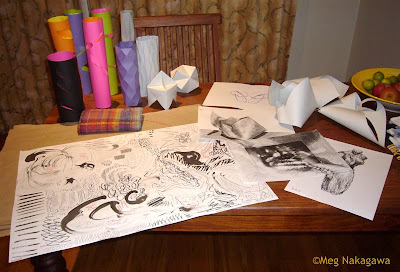 There were mark-making, drawing, and paper sculptures. I could see how some of these would help my drawing, but not a lot made sense as learning tools for designing, but I persisted. Ali said these were rather technical exercises, and they tried my patience, but I'm glad I did them all; I'm sure they will help at some future point. The rather prescriptive paper sculptures brought back the nightmarish school days of origami, at which I totally sucked! 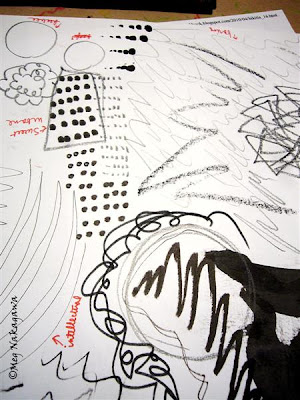 On the sheet were I was to make different kinds of marks with different tools, Ali found two areas of interest I could do more with; the irregularly placed and shaped "dots" and what to me looks like Chinese brush-painting mountains. We chose these areas for me to focus on, in trying to come up with interesting and refined plans on paper and woven samples. The "dots" in particular can be woven in different structures, and I might even try a pickup.

Just before she left, Ali had a look at my playing practice; I said I might use them as weft, and she said I could use them to weave, and then do a shibori of some sort, to create multiple layers of interest. I thought she was teasing me, (you know I am get with "layers upon layers",) but she wasn't! So..... I'm not sure what's going to happen with that one.

If all had gone to plan, we would have finished the year of design studies this month or next; As it is, we just finished Chapter 5 of the design book. I must be more vigilant, studious, regular, and serious.
Posted by Meg at 7/14/2010 05:16:00 PM