The Week that Was

Ben and I have been working in the garden, sporadically. And that's heaps better than what we usually do: none at all. So on the weekends we try to get in around half a day per day, but after years of serious, (as in, "I'm not just exaggerating") neglect we still have a long way to go. We need to hurry because trees are starting to have tiny leaf buds and come August I'll have to sow seeds and some years it becomes too dry to transplant the bigger plants, Ben's roses included.

On Monday, I was tired but I do have a sincere desire to live a proper life of a proper weaver, so I resolved to do something every day, and I wound another MWW - My Weird Warp. I'll show it to you maybe very shortly, but it being another one of those that sat in various dark places for a decade, without a cross, it was a bit tedious. And I washed my plied yarns.

Tuesday morning I had the electrician install a few power points in strange places, and check what happened to our TV reception, (for three weeks we've only had one TV channel, but it didn't decrease our TV viewing time; we just resorted to watching a few unthinkable reality shows!) Ben got a bit excited about the options to remedy the TV reception, and decided to take the morning off. (He told me then that he had to work late for maintenance anyway.) so I had two blokes wandering around the house all morning.

In the afternoon, I got to on to threading the MMW on the big loom. Previously I might have finished the threading in a couple of hours but I had a hard time concentrating, and was thinking of coming to terms with physical and emotional aging, of how I cannot get as much out of the day as I used to. (I was always a slow, sluggish child with occasional burst of hyperactivity anyway.) I guess I was drafting a post about in my head. I persevered, but didn't manage to finish the job.

Wednesday morning, I had hoped to read a magazine article before getting up to finish threading and perhaps sampling. But I found two emails from two galleries, one requesting a small red cashmere scarf in time for a birthday on August 1, and another requesting withdrawal of some of the older pieces and delivery of new pieces, (which I promised to do back in... March?)

As regards the birthday scarf, I said I could deliver on Monday, but the gallery said Friday morning. I knew it was a silly time frame; because the scarves are between six to eight inches wide and between 150-180cm long, people think I can whip it up and an hour! But I hate saying no to galleries, so I got on to it, making the warp while designing in my head, then threading, sampling, changing the treadling, and weaving.

Since all my looms were occupied, I decided to use the small sample loom, on which there is a sample warp, but I was intending to rethread it, and lo, it has one more warp beam! 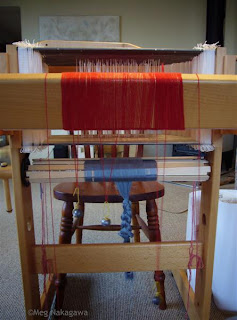 I wove until I couldn't see well, and then had a long bath and ample green-lipped-mussel soft-tissue serum, then to bed.

Thursday I wove. By night, I could only walk like a duck, and very slowly, but I got the scarf finished. And since it's a special gift I threw in a nice box. 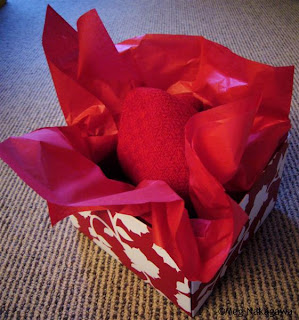 Friday morning, I delivered. But my body was hurting.

At least it got me weaving again, and quickly. This weekend, well, tomorrow, I have to wet finish three pieces, see what else the other gallery might want, and package them all up. This gallery, I don't need to paperwork, as we can do it together and amend her list.