I know it was only my first experiment, but I'd been more disappointed than you might expect not being able to see the diamond-shaped weave structure in my coffee dye experiment. I had to rescue them from underneath Husband's tush last night, and in the darker light, I could see it, and from time to time, quite well. Which suits my purposes well, because I like the "is there or isn't there?" aspect.

I've tried to capture it this morning, but it shows up best from the sides and in the dark, so the color is not true but you get the picture? :-D 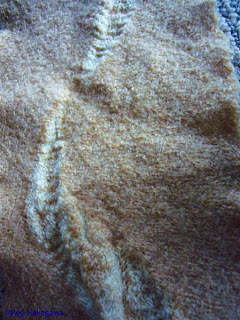 The contrast and colors are exaggerated in this one. 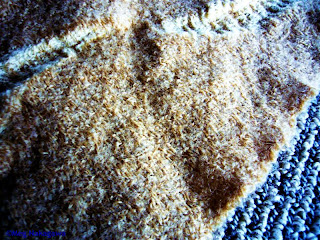 (To be honest, I think I can see the diamonds better in the photo posted on Tuesday. They show up better in photos than in real life, that's for sure.)

The wood-ash mordanted swatches feel dusty to handle, but they are dry, so I think I'll let them cure in an old pillow case. I may even take them out and do another cycle.

Because of its fuzziness, the flannel looks gray and, (honestly?), disgusting, but I have a meter of it, and I've been thinking I should get another meter so I can make a wee something for myself; a top, I think.

The table center on the top was given to me by Andrea. We think the center part is linen, and the hand-crochet in cotton. It has a little stain and a small rip, but dyed with flowers, we think it can be a lovely wee thing to have on an oak table at morning tea. 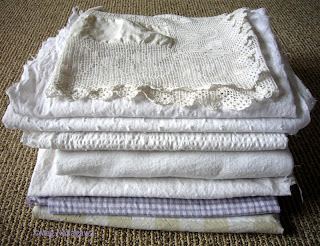 Beads. Yeah. I went in to look at some, and shoot the breeze with Owner Laurie, but you know how it goes. The Bead Gallery has three door-sized tables where everything on them is just $4. They are nice necklaces in their own right, but you, and Laurie, know I intend to take them apart and put them on textiles. Although I still feel pretty much the same as regards beads on scarves. He's a good salesman, that Laurie, and I have no will power.

We're not telling Ben about the beads just yet, OK? 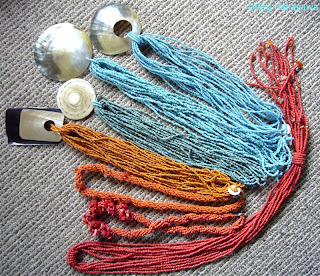