After a day like yesterday, it was hard to switch my mind off. This is the second last thing I did; something rather uncharacteristic. It's a wool boucle shawl, one of the two my parents' friends from Australia discovered to be moth-damaged last year. I don't know what to do with this piece now, but I like the way I remedied it. (It's also been washed and cleaned and 'fixed' as much as I could.)

I always wonder when is the right time to press a piece; last night, I though the task of attaching the flowers would crease the piece but in retrospect should have pressed it first. 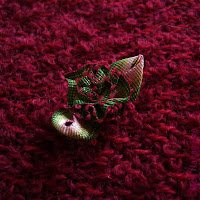 I finished India Flint's dye book - the first ever dye book I managed to past the introduction. And my conclusions: alchemy, "local", time/slow, and white magic. Here and here are some photos from her recent Toronto workshop by one of her students. In terms of preparation for the workshop, (and I have four months and a bit left,) I would like to look for, in charity and second hand shops, or work myself some white embroidery on white fabric. And crochet small squares with different yarns. Jo Kinross suggested this among many other things: the idea is to dye the squares, unravel, and in my case, weave with the dyed yarns.

But for the next little while, I want to go back to something I've been thinking about for a long time: how to combine weave structures with shibori. After yesterday's coffee experiment, it appears this is going to be harder than I thought, but I'll write more in my MWW post later today. After I finish threading the MWW.
Posted by Meg at 7/28/2010 08:16:00 AM