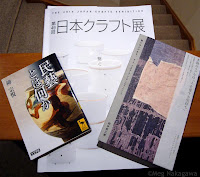 In my continuing effort to read as much as I can books relating to the two workshops I am attending later in the year, (Yoshiko Wada's "Boro" and India Flint's dye,) I finished "Mono niwa Kokoro ga Aru" ("Hearts Reside in Objects"), a collection of mostly biographical essays by Tanaka Chuhzaburoh, far right in the photo. It's a little convoluted, so let me explain how I got to read this first.

Mr Tanaka is an old-school, (self-taught; he was never formally educated,) archaeologist, anthropologist and collector, mostly of every day items, from the Nanbu and Tsugaru regions, including the indigenous Ainu people's artifacts, at the top of Japan's largest island, Honshu. In fact, his hometown is somewhere on the top of the ax-shaped peninsula of Aomori Prefecture. (Link to maps below.)

I came across his book when I visited Amuse Museum in Asakusa, Tokyo in February with my mom. I never got far enough in sorting my Japan pics, but I intend to show you some textiles, particularly Sashiko, to you some day, because it was one of the rare museums in Japan where photographing was allowed. (See India Flint's link below.) Among other things, the owner of this museum is also from Aomori, and so the museum came to houses a large number of Mr Tanaka's textiles. This collection of essays was published by them, as well.

"Boro" means "rags" in Japanese, and it's as simple as that; the word has no regional, aesthetic, age/era, color, content, method, or origin-related inferences. Any cloth can become a boro (noun) or boro boro (adjective) in hours if you, for example, used the wrong washing cycle.

I blame the Nuno ("nuno" means "cloth" or "fabric") poeple for using everyday Japanese terms to mean something new and specific in the textile/craft/art context. Linguistically, transition of usage is neither bad nor good, but I've had a hard time figuring out some new usage of originally-Japanese words in the English-speaking world, particularly in textiles. (I used to hate being asked if I "do nuno", because I weave, but you know I don't felt.) In 2009, another book titled "Boro" was published, and I understand the majority of textiles in this book is from Mr Tanaka's collection.

I surmise, from what I read in the past few months that "boro" in the current textile context means quilt/patchwork, often with embroidery, of old indigo-dyed cloths, preferably from Japan. Or "spectacular quilts", according to Yoshiko Wada, who, I read somewhere, curated a "Boro" exhibition, either in conjunction with or held at Amuse Museum.

I'm loosing my train of thought. As you know I started weaving after I came to New Zealand, so I know little about Japanese textiles, other than what you normally pick up as a Japanese person living in the Japanese textile culture. My worlds are colliding. More later.

India Flint was at Amuse the day before me. Here are some photos.
Mr Tanaka on Wiki, in Japanese

Except on Boro from the "Boro" book, in English