You have to forgive me if I sound funny; I've been under the weather for a few days; you know, one of those times you're not "sick" sick but not right? I took a cold pill this morning because I had to go do something, and all day I've felt as if I'm sleep-walking.

Ronette asked me to come and talk to her regular Polytech students, (as opposed to her private students leaning drawing in a Polytech venue,) to show/explain about Japanese packaging and cultural symbols. And I did.

What I learned afterwards was this particular class is Level 4, I think, meaning the students have not had formal art education at high school or tertiary level and/or don't have a portfolio to apply for the Degree courses. They take either a year or half a year and learn the basics of art making and will have, at the end of the year, a portfolio. I thought that's exactly what I should be doing - not to prepare for a degree course, but learn to design. In fact, I had a look at this level a few years ago, but at that time I couldn't fathom being a full-time student, and I'm even stinger with my own time now, so I guess I'm not enrolling any time soon.

Ronette explained how she teaches designing; drawing, chanting colors, contrasts, values, repeating, and she mentioned several other things. I now know there are permutations on how to teach the technique, but I'm happy to discover I know what many of them are, but haven't used enough of them to really "know" the techniques. And I don't know the terminology.

But she mentioned the importance of not knowing what they'll end up, or even the material and technique, until later in the game. And as you know, this is my problem; consciously or unconsciously I will have picked out the fiber content, EPI if I know the warp yarn size, and a choice of a handful of weave structures before I embark on the playing around/experimentation stage. These early decisions narrow down the possibility of an interesting (new!) outcome drastically, and render my cloth kind of predictable and same-old-same-old every time. So we talked about that over berry rulade the Suter Cafe.

I am so pig-headed, or stone-headed as we say in Japan.

So, on my own, I've been struggling with my "pebbles". I'm suppose to weave samples expressing my pebbles, which are calligraphy ink blotted with Q Tips on drawing paper. Ali told me to work in both direction, meaning, 1) on paper, drawing, experimenting and even using PCW weaving software, but going more or less the "design" path, and 2) on the loom, because she probably suspects I'll be "designing" and "experimenting" with certain weave structures in mind from the start anyway.

Yesterday, I traced the print out of the pebbles on a plain sheet, then on graph paper; then I tried to plot the shape closest to the original by coloring in grids. This afternoon, I'll draw some pebbles free hand, and transfer them onto graph paper. I might tear paper and past and see if I can create a pleasing pebble pattern. And trace that onto graph paper.

I'm not feeling very inspired, nor creative, and I would have thought this stage is supposed to be great fun. I also find this stage time consuming, and that if I had "gone to art school" I would have learned shortcuts; at least it wouldn't take so long in between thinking up different ways to experiment.

Intellectually, though, I know that even if I had gone to art school, I would have to experiment just as much, investigate different techniques, that this stage would be time-consuming, and keep hoping I'll come up with something that pleases me, something I want to investigate further. At least that what artists say at Floor Talks.

Am I confusing you? I think this cold medicine is quite strong, I feel like I might fall off my chair if I don't stop thinking.

Meanwhile, what I have been enjoying is the Sketchbook Project. I've been opening pages at random, and making the simple but interesting Clare Plug-style collage when I feel like it. I've done about eight so far; mostly small ones. But from New Zealand magazines. Nothing weaverly so far. And I might leave these as they are, or I might revisit some and do something else to it. Who knows. 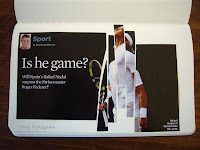 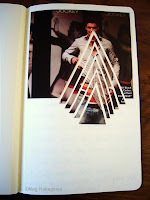 It's a worry, though, when I see a popular All Black in a men's undies ad, and worry what he would make of it 20 years from now, and share his future cringe, all the while unintentionally highlighting his crotch.