Just When I Think I've Got It

Just when I thought I learned more about controlling my moods, I was reminded I hadn't. After gardening Sunday and Monday, I thought I could naturally transfer the energy on to my work, but that wasn't to be. Instead, for two days I obsessed about the promised rain, finally resolving I would go outside to put seedlings in the ground only when the rain finally arrives. Even then, I roamed around the house looking at the color of the air and stepping outside to smell the rain approaching. I should have just gone outside and weeded, because I wasn't getting much done inside. 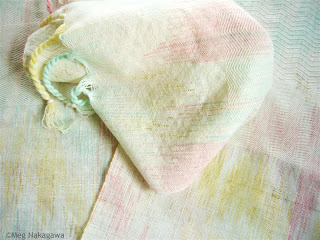 On Tuesday, I tried to weave another swatch from the Weird Warp. I had about a meter left on the loom, so I was hoping to get a longish, (70cm?) swatch. As soon as I started, though, the warps started breaking again, and after half an hour of weaving and managing about 7cm, I gave up. I cut off the short sample, stripped the loom, and threw the lot into the rubbish. (Normally I save thrums from my good yarns.) And be it the textile paint I used, or that I had stored it casually for 10 years, I'm not interested in investigating why this warp was so prone to breakage. End of story. The only good thing that came from weaving these swatches has been to discover I like the combination of warp-paint and plain weave; this was the first time I wove any length of plain weave since I attend Bonnie Inouye's workshop in 2002, (and nothing but for seven years before that,) but I liked it in this context.

I wanted to put my first of three proper, good merino yarns; these are for scarves to be pole-wrapped-dyed. But I was exhausted I couldn't stay vertical and had a power nap on the floor between the loom and the bench. 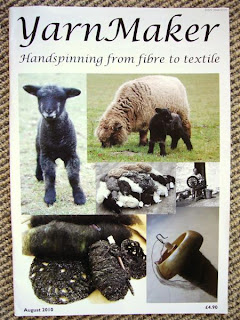 It's the first time ever a friend of mine published something, as opposed to befriending published writers, or discovering so-and-so had been published some years previously! (Baby brother included, but he co-authored a slim volume on personal bankruptcy laws, so not my cup of tea, it doesn't count.)

I have some idea of the amount of work Dot put into the magazine for quite some months, not only the fun writing, editing and photographing parts, but the horrible business side of publishing, but when I finally got my hot little volume, I couldn't help feeling she just whipped it out of thin air.

This issue had an article on spindles, and I took out to admire my two tiny spindles made by the late Bill Fournier. One is for spinning fine merino, and the other, finer merino or silk. I learned to spindle-spin years ago, and I thought it would be a spectacular way to always stay in touch with textiles, particularly when I'm traveling, but the velocity of spindle spinning has detracted me. Still, colorful accent yarns, for example, can be spun on a spindle over weeks and months and finally woven into a tiny scarf, and wouldn't that be a lovely "journey" or "process". This is definitely something to put back on my list of possibilities.

By the way, Linda is teaching silk spindle spinning in Maine. I wished I could hop over there magically.

The thought of slow spinning made me want to read the latest contributions on SlowCloth. In principle I love the idea of slow cloth, but what I do and how I work is so slow I can't think beyond how I work now. I enjoy reading what others say, but I feel a voyeur, an outsider. Still, the photos are scintillating; I wouldn't mind possessing some of the works; the images must be what brought me back to beading on Tuesday night. 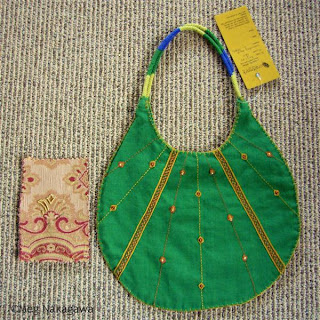 Exasperated after a counter-productive day, I had the choice of a0 doing nothing in front of mindless crime shows, B0 ironing while watching crime shows, or c) beading while watching crime shows. I must have been desperate to get back on track, because even though I was physically exhausted, (for no real reason,) I put gold- and bronze-colored beads on the bag I bought a while back, and it looked a little more to my liking. Encouraged by this small surprise, I got started on one I toyed with last week; with this, instead of counting the beads and trying to make things symmetric and "perfect", I decided on a more child-like, spontaneous look; because I'm working under artificial lights at night, this was not only easier but a saner choice.

Just that little bit gave me great joy, and I went to bed feeling like I had done something this day.

Wednesday, I paced around the house waiting for rain like a big cat in captivity. It was pathetic, and a little funny. I had hoped to work on my design module, but my head refused to engage, so I did what I could; drew grids on drawing paper that I will need later, cut up photos from two old magazines that will suit my purpose, cut some of them roughly into the size of the grid unit. Blah blah, for three hours. I contemplated beading, but didn't have the gumption to do what I knew would make me feel better. Wuss! 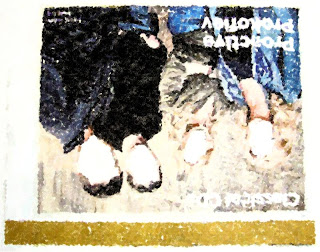 Among the photos, I found a photo of a color scheme I love, stoney, taupy neutrals with blues and indigos; I love the stylish discipline in this color scheme, without making it harsh by turning the neutrals overly light or devoid of hues. I've seen some textiles in these colors, but never something I liked enough; I never considered the reason, but my first guess is the proportion and the distribution of the color areas. Another thing on my list.

(I have to take out faces when I need to concentrate on colors, shapes or patterns, or else I get too too distracted by the expressions. Orientation other than the right side up also helps.)

Rain came late Wednesday night. I too tired to feel happy or relieved, but it must have done the magic, because today I woke up from a dream of a spectacular cotton shawl. Unfortunately I'd need a Jacquard loom or beyond-insanity pick-up to execute this, but it was in my gold-and-pale-blue combination, and I woke up happy and motivated.

My eyesight is so blurred I could still be asleep this morning, but the mind is alert. Today, I'll be working on a) drafts for the to-be-pole-wrapped-dyed pieces, b) drafts for the pebble designs, or c) the design module. I don't think today will be wasted.

Tonight is the last session on Skirt Block Pattern Making with Jill. We come home with our individual, fitted skirt blocks.
Posted by Meg at 8/26/2010 06:00:00 PM