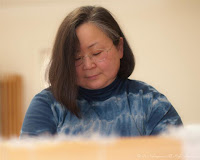 I needed a photo with me as a weaver, so Ben chopped off about 25cm of my hair, (the weight of my pony tail was giving me a scalp-ache), and then he had a go. At shooting. Pictures. I first put on a shirt that made me look less rotund, but I really like the shibori job I did on this, so I changed. It's a secret handshake of sorts to all of you who saw it here first.

I like the laughing one because it's more me, but we decided to use the one with both arms intact and the hair less messy. Ben treated it with a softening portrait something-or-rather with his application to the top one.

Chris, our Marlborough Weavers leader, said at the start of this year, we weavers should be seen wearing garments made of fabric from our looms, but similarly, I think it's nice to have profile photos where we are on our looms or with our equipment. Even if you can't see it in the final product.Ben and I shall try harder to show more loom next time, but considering how much I hate having pictures taken, this will have to do for now.

I'm staying with the Japanese design book. It's called "Katachi no Nihon Bi", or very roughly, "Japanese Aesthetics in Shapes" by one Professor Mitsui Hideki. He teaches design at university level, might have written a textbook or two judging form the titles, but he also writes numerous books on Japanese aesthetics and Japomisme for lay people, and this is one such.

From time to time, I want to say , "Must you spell it out thus? Don't we Japanese all know it?" But he does in order to move to the next level of discourse, and that's when things get hairy. I don't know design jargon in Japanese, and not much about Japanese art history. And according to him, I am more "Western" in taste/preference than Japanese, and sometimes I try to analyze design in a more "Western" way. So the fact is, he has to spell everything out so I, or any reader, can understand what he claims is a normal/average Japanese way of appreciating design, and place ourselves on a spectrum of Japanese-ness. And if you this sounds very restricting, well, we Japanese like to think we are all the same, even though there are big regional, generational, socio-economic, and personal differences; but it's polite to assume we all see things the same way.

He covers excruciatingly interesting stuff, like how Japanese prefer geometric balance in composition, how we have a Silver Ratio (1 to square root of 2) as opposed to the Golden Ratio, and the dichotomy of Japanese preferences seen in the use of diagonal lines. And much more.

The proportion in composition explains why I see Japanese -style quilts made in the West and they feel "wrong". Japanese are very big on how things are supposed to be done, the myriad of unwritten rules called "common sense" in all spheres of life. And if you challenge these rules, the answer is often, "If you're Japanese, you wouldn't have to ask."

This is why the book is interesting. Mitsui tells us what pleases us, and shows these to us using numbers and pictures. That he quantified and wrote in words what we think we know instinctively is in itself fascinating.

I can only read 4 or 5 pages at a time, and study the illustrations over and over again. I thought to explain some parts on this blog, but as with many things Japanese, it just doesn't translate; in our language even a grammatical suffix can change the nuance and I need sentences and paragraphs to clarify.

I will need to read the book several times to understand, to learn, what Mitsui writes, and I'm only a quarter of the way in Round One.

Japanese are supposed to be great at negative space. With some paintings and woodblock prints from the Edo period in particular, the majority of a work's plain can be negative space with only a hint of "positive" stuff around the edges.

I've never been good at spotting negative spaces and once again it came back to bite me in class on Friday. We were to show the figure using a minimum amount of the lightest areas. I can't do that, so I started putting in the lighter area and built up the lightest parts, in the same way I do shades. All the (electric) lights were turned off, except the two bulbs above the model's shoulder. Ronette kept reminding us to get the distances between the light areas right.

This was very difficult and slightly strange to me, and when it's this difficult, the experience feels very personal, as if I'm caressing the model, not in a sexual but a friendly, mutually-supportive way. And if I had to do it, I'm glad we had this model.

When I don't understand something, my imagination dons a straight jacket. I hoped I might get something from a negative image of the drawing, but no.

I bet we're going to do this technique again next week.