Thursday night was our last session of Skirt Block Pattern Making Workshop with Jill. The session consisted of the second toile fitting, (each student being recommended different styles, lengths, fullness,) finalizing the fitted skirt block, some thoughts on fabrics; notes on the blocks to make them easier to use; making a second, flared skirt, block; and how to cut patterns for facings. And perhaps some other handy matters.

Because I missed last week, Jill had my altered paper block for me, (the good news was I wasn't as asymmetrical as we thought so I needed only a half-body pattern,) but I had to make a second toile, so I couldn't listen to what Jill said to others. She sewed my toile, then Lana tried to fit it, but because of my unconventional shape, I had to stand around in the toile for a long, long time while Lana and Jill discussed alternatives on how to try to solve multitude of problems, and also while Jill went away to help others. I think Jill was exasperated by the ill fit of the body.

There was no other way it could have been done. In a way I'm glad Jill didn't tell me to make up the second toile at home so I can be fitted with everybody else; that would have been even more embarrassing. And Jill and Lana were most professional and polite, and there was nothing anybody could have done or not done under the circumstances. Still, I couldn't help feeling bad; afterwards, such words as "humiliating" and "excruciating" came to mind, but at the time, I just felt genuinely sorry for myself and wanted to get out of the toile and back into my elastic-wasted pants.

I spent the rest of the class time altering the altered skirt block, and I came home with more fabric to make a third toile, and must go get fitted by Jill again one Sunday. Everybody else went home with two completed skirt blocks, fitted and flared, except Lana, but she said it was OK because she was tired from work.

The next stage is pants/trousers; I'm not interested in sewing my own pants, but from memory we were required to do a particular stage before we can attend the Top Block stage, and if it is pants, I would have to go, because making jackets and coats with handwoven fabric is why I wanted to learn pattern-making in the first place. But if fitting a skirt was this bad, I don't know if I'll survive a pants fitting. It's testing my ability to put on a brave face, bluff, rationalize, whatever it takes to survive each session.

I still get a bit teary thinking about Thursday night. 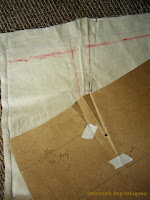 Friday morning was drawing, of course, and I got up exceptionally early, still; I kept shouting, "Get. Over. Yourself!" but I still felt sucky.

I set up my easel in the same place every week; it's where I feel at home and can hear Ronette and the music, but am not bothered by some of the chattier classmates. The downside is, when Ronette turns off the light so we see the light/shade better, my spot is so dark I can't see what I'm doing. And on a week like this, it may have been the wrong environment to place myself.

I noticed also Ronette has been talking about gesture drawing being about our own gestures while we drew, as much as the model's, so either I never heard this in the first two years and a bit, or she's lurking around here. Anyway, I was relieved to be allowed to use A1 paper again.

After drawing, Jo took me to her house for a cuppa. She lives in a beautiful part of the hills in an early 1900 Villa, tastefully modernized. It's one of those wooden homes with extra high ceilings, tasteful nooks, stained glass windows, intricate plaster and woodwork decorations. And her house had so much wall space the many, many art Jo and Dave collected were not cramped or overwhelming but lovingly (but casually) displayed. It was nice to see Jo's paintings and sculptures, too, and how they changed over the years. It was wonderful to see her sculptures, (I didn't know know she sculpted!). But I admit the best part was a detailed tour of her studio, and how she had her material/storage set up, and that she is besotted with Giacometti.

And for me, though Jo has a much bigger space than I, (and the ceiling height allows for almost double the storage than in a room with standard ceiling height,) she definitely has less clutter, the "just in case" stuff, and certainly nothing on the floor. So I know I'm on the right track to use up my yarns on my floor; I would be able to work on my plastic picnic tables, even if I have to store my non-textile art supplies there. I have considered hanging shelves from the ceiling, along the wall, as was recommended to me by Mrs Armstrong, a Swedish weaver that had a weaving school in Picton, but I think I'll still hold off, because visually it will cramp the room, and practically I will have a hard time retrieving stuff from that height. 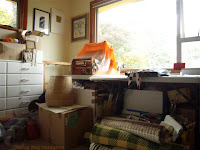 This Saturday is going to be an interesting rain/sun kind of a day. There is a floor talk on Orientalism at The Suter. It's been two weeks since my "needs ironing" stack has taken over the small couch, and still growing. There should be plenty of opportunity to get over myself.
Posted by Meg at 8/28/2010 09:44:00 AM