This is How It Should Be

* Not about weaving, except for the mention of a pesky warp; otherwise it's a long, depressed read; get it?? *

It takes time and practice to recognize the symptoms of mild-to-moderate depression, then more time to crawl out of denial, (though sometimes denial works as a fast track,) and then engage in constructive activities leading to normalcy; I should know this after seven and a half years.

When I feel like that, I do engage in doing things or else my life stagnates and then spirals downwards. So I've managed to keep myself busy every day this winter, though this one has been nothing like the last, which was pretty bad as you recall. And when I relax, how can I describe it, I make a conscious effort to relax, instead of merely not engaging.

This winter, these "doing things" has been physically weaving on the loom on bad weather days, and gardening (i.e. weeding) on sunnier days. Our place had been badly neglected these last few years, and there are heaps of work to be done. And though we are behind in our progress, (I had really big plans), we have been spending time so our place looks a lot better, (in as much as there is evidence of the effort.)

Very timely, too, in New Zealand this winter, a gorgeous, magnificent, inspiring, hunky former All Black, former coach of Italy and current coach of Japan, (rugby union, folks) named John Kirwan fronted a national initiative called The Journal to help folks like me.

In the six-week online course, the most interesting thing I learned was right-brain problem-solving. Apparently it's not just me who feel overwhelmed by things we should do and end up doing none of them, but it's one of the symptoms. (And if you have acute anxiety as well, it's a double whammy in this respect.) So one of the exercises was to come up with out-of-the-left-wing, right-brain solutions to our problems we wish to tackle.

In my case, I had picked gardening as my stay-engaged activity, but I found it hard to work in the wet, weedy areas where neighbor cats deposited organic matters. Instead, I decided to work in the nicest, tidiest part of the garden, so that some days all I had to do was to pick a few leaves, and still I knew I had one small area was tidy. But once I'm outside, naturally I'd pick a few more weeds, and some days I was outside for 15 minutes, and others, for up to five hours.

Of my symptoms, I began to recognize one as a clear warning bell a couple of years ago; sometimes after a few days of blurred vision, I try to lift my eyebrows. I don't know if you know this, but if you've been to a South Pacific island, you may have encountered a special greeting of lifting the chin quickly, tilting the head back slightly, and raising eyebrows as if say "I see you, hello." When I'm depressed, my vision becomes not only blurry but narrower and I need to lift my eyelids to see better, so I keep doing this South Pacific greeting to my four walls.

My vision had been blurry all week, and on Tuesday, I caught myself greeting the walls again. On Wednesday, I went out and started weeding an area that didn't make sense in the scheme of things, but I recognize the sign. I couldn't finish the work, so expected to on Thursday, but in spite of the even lovelier early spring weather, I ended up not going outside on Thursday because I couldn't decide in what order to do things that day, and I ended up descaling teapots, a kettles and a coffee machine! And I felt really bad about not finishing the weeding, because I knew it was such an easy task. Instead, I decided to concentrate on the headache and the vertigo, and missed the pattern-making class.

Came Friday morning and I felt nauseous and missed drawing, but I was determined not to waste another day. It was supposed to rain, so I wasn't planning on gardening, but the sun came out. I wove a little, mended a pesky warp and resleyed, and worked in the garden in the afternoon. Ben came home and he wanted to get takeaway food, but I cooked a salmon pasta dish, and because there was no good TV so we went to bed super early and read for hours.

The narrowing of the vision comes not early on but well into my down cycle, but at least I recognize it for what it is, and when I do, at least this time, I was able to enact on the information. So, on my "sick" day, I managed to weave, mend a pesky warp, garden, and then get started on a huge novel. Not being productive on well days, well, that's another issue.

Normal bloggers may post fabulous plant/flower pics shot in great light and at the plants' best, but I like these taken Friday night after I had a long hot shower, when dusk suddenly turned yellow and the world looked strange but not at a bad end.

A crab apple tree that we've had in a dark spot first, then in a tub, since around 1997. It needs to move out into the ground; it died three times, and last summer I thought it was really gone, but I saved it just in case, and it didn't disappoint. 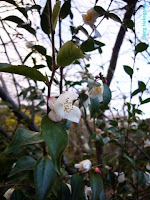 Tiny white sasanqua under our glorious cherry tree - some years this is the only thing blooming in winter. This baby needs trimming after all the flowers are gone.

Our Miniature Kowhai had its best ever year this year, branches bowed with huge clumps of flowers and at times a tui or two hanging upside down sucking its honey. However, it, too, must be trimmed hard because it's quite big now and overshadowing everything around it, including an unidentified yellower-flower bush that is Ben's favorite. "Miniature" in this case only meant "not huge, like it's supposed to be, as in taller than your house." 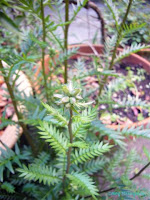 One of the new acquisitions; it's supposed to have big blue flowers, but I haven't studied the tag too carefully because then I would build up unrealistic expectations, particularly as regards colors.
Posted by Meg at 8/21/2010 02:13:00 PM